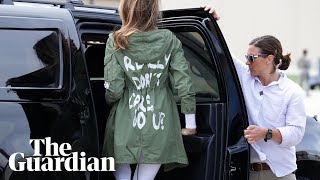 Melania Trump wears 'I don't care' jacket en route to child detention centre First Lady Melania Trump wore a jacket that read 'I really don't care, do u?' as she boarded a flight on Thursday to a facility housing migrant children separated ...
(Image by YouTube, Channel: Guardian News)   Details   DMCA
I assumed the story about FLOTUS wearing the jacket emblazoned with "I REALLY DON'T CARE, DO U?" on the back, while on a trip to inspect detained refugee children, was a Borowitz or Onion satire. It's not, it's an actual event in the American Satyricon, leaving some scratching their heads and others enraged. And it likely leaves satirists out of a job.

Here's a collection of tweets:

RT @thedailybeast: Jimmy Kimmel on Melania's jacket: “Remember when Michelle Obama showed her bare arms and went to an oil spill and Fox Ne… at

RT @ABCWorldNews: Melania Trump removed her controversial jacket before landing in Texas – but wore it again upon returning to Maryland. Pr… at

But does it mean what we think it does?

Related Topic(s): Andy Borowitz; Melania Trump; Satire, Add Tags
Add to My Group(s)
Go To Commenting
The views expressed herein are the sole responsibility of the author and do not necessarily reflect those of this website or its editors.