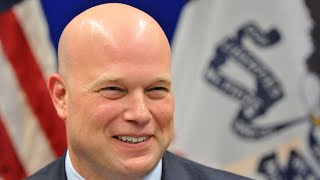 Whitaker's appointment was an illegal and blatant end run around the Attorney General Succession Act and the Appointments Clause of the Constitution. Whitaker must be removed and Rosenstein should be appointed acting attorney general.

Trump's firing of Sessions and replacement with Whitaker appears to be an effort to terminate or dilute special counsel Robert Mueller's investigation into ties between Russia and the Trump election campaign. Infuriated after Sessions recused himself from the Russia investigation and Rosenstein appointed Mueller as special counsel, Trump had been champing at the bit to replace Sessions with an attorney general who would have his back. As acting attorney general, Whitaker will assume authority over the Mueller probe.

However, legal challenges to Whitaker's appointment are mounting. Three senators have filed litigation to prevent Whitaker from carrying out the functions of attorney general. The state of Maryland has requested an injunction to remove Whitaker and substitute Rosenstein as acting attorney general. Moreover, a group of Congress members wrote to the Justice Department's ethics officer demanding Whitaker's recusal from the Russia investigation.

The Appointments Clause of the Constitution Requires Senate Confirmation

The Appointments Clause, located in Article II, Section 2, Clause 2 of the Constitution, mandates that principal officers of the United States be nominated by the president and confirmed by the Senate.

Alexander Hamilton, in "Federalist 76," outlined the rationale for the Senate confirmation requirement:

"It will readily be comprehended, that a man who had himself the sole disposition of offices, would be governed much more by his private inclinations and interests, than when he was bound to submit the propriety of his choice to the discussion and determination of a different and independent body, and that body an entire branch of the legislature. ... He would be ... afraid to bring forward ... candidates who had no other merit than that ... of possessing the necessary insignificance and pliancy to render them the obsequious instruments of his pleasure."

Indeed, Whitaker's primary qualification for the job is his loyalty to Trump, including his disdain for the Mueller investigation, support for the firing of former FBI Director James Comey and defense of Donald Trump Jr.'s Trump Tower meeting with a Russian operative during the presidential campaign.

Since the Senate has not given its advice and consent to Whitaker's appointment, it remains illegal. That means that anything Whitaker does or tries to do as acting attorney general is invalid, including ending or impeding the Mueller probe.

The attorney general is the chief law enforcement officer of the United States. He or she supervises government officials whom the Senate has confirmed as well as the special counsel, appoints immigration judges, decides when to enforce federal statutes and authorizes national security warrants.

On November 14, the Justice Department's Office of Legal Counsel wrote a 20-page opinion purporting to justify Whitaker's appointment by citing the Vacancies Reform Act (VCA), which states that the president can order an officer or employee of an executive agency to assume the functions of a vacant office.

However, it is a well-established rule of statutory construction that when a specific statute and a general statute both apparently apply, the specific statute takes precedence. While the VCA covers vacancies in general, the AGSA specifically applies to the vacancy of the attorney general. Thus, the AGSA is the statute that must be followed in this case, and it mandates that Rosenstein fill the vacancy created by Sessions's resignation.

Even if the VCA could prevail over the AGSA in this situation, the Constitution's Appointments Clause would still nullify Whitaker's appointment, because a congressional statute does not trump the Constitution.

Related Topic(s): Deputy Attorney General Rod Rosenstein; Investigation; Matthew Whitaker; Recusal; Senate, Add Tags
Add to My Group(s)
Go To Commenting
The views expressed herein are the sole responsibility of the author and do not necessarily reflect those of this website or its editors.