Living in the COVID-19 environment

You've heard the US Surgeon General saying, "We should be acting as if we have the virus" to flatten the curve? How is this simple statement hugely relevant to protecting your loved ones and other people, helping medical staff in Malaysia and other countries desperately short of necessary protective equipment, doctors forming Facebook groups on social media to exchange advice on how to keep current patients alive based on their grim failures, and saving doctors in countries such as Philippines and Italy?

I used to build decontamination chambers and work in hazardous environments, hence I'm familiar with hazmat protocols, including locked high radiation situations. People working in hazardous environments do so confidently because of the knowledge ensuring they can perceive their world without fear and the simple steps they take, to keep both them and their families safe.

If you perceive the world the same way, you take the fear of the unknown out of the equation and are taking all the proactive steps that are possible.

Fear of the unknown is the worst enemy you can have today. How you should react to COVID-19 is the unknown. While we don't know how the outbreak will turn out, there are reasonable, common sense, industry-proven concepts that can replace the stress this unknown brings. It can be done at little to no expense.

It is common sense that all information is subordinate to medical and government pronouncements. It is irresponsible to ignore those because the situation is rapidly developing. We are still at the beginning.

Beyond that, there are no caveats to applying best practices. 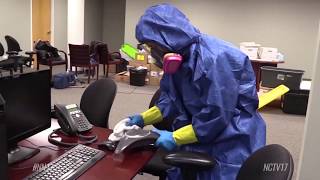 Accept as a fact the entire world is now a contaminated space and respect it as such. Starting with that view takes the guesswork out of everything you need to do. Normal people thrive in much more hazardous environments than this on a daily basis because they respect that fact.

Never forget some people will not try to understand or accept basic facts about this hazardous environment enough to take safeguards and protect themselves and you don't know who they are.

Decontamination space is needed because you want to minimalize even the remote possibility of contamination from the hazardous environment entering your home. Everything outside regardless of the source has to be considered this way before it's brought in. Wipe it down.

The clean area is your home. You diminish the potential of contaminating it by simple steps, nothing extravagant is needed. It is the one place on earth you know that nothing can harm you. Protect it.

This is why people leaving areas with high infection rates are more at risk of contracting the virus than people who don't and are taking precautions. That's aside from becoming a new point of contagion.

The reason is simple. You are moving into areas and are in contact with unknown people and objects assuming they are safe because of geography. All you do in reality is throw all precautions away and move across a contaminated environment without safeguards. Doing so multiplies the odds of contagion by something as simple as touching the wrong doorknob or a gas station pump that a hundred people you don't know did before you.

Related Topic(s): Patients; Patients, Add Tags
Add to My Group(s)
Go To Commenting
The views expressed herein are the sole responsibility of the author and do not necessarily reflect those of this website or its editors.