This weekend conservatives are holding their annual Conservative Value Voters Summit 2008 in Washington DC.  Last year I wrote an article about the Summit and called for counter rallies to challenge this conference as part of a progressive effort to Take Back the Values Debate.  There didn't seem to be much interest or support of the idea among progressives.   Progressives still miss the point by spending most of their energy attacking Bush, Cheney, McCain, Palin, etc, instead of clearly connecting them to the underlying Failed Conservative Values of authoritarianism, fear, secrecy, deception, self-righteousness, hypocrisy, indifference, dogmatism, violence, etc. and offering the progressive alternative values.

While  critiques of the leadership of the conservative movement is important, these leaders are merely the latest heads of the Conservative Hydra. If you cut off one head, two more will grow in it's place. To kill the Hydra, you need to stab it in the heart from which the blood of failed values flow.  Yes, there needs to be a critique of failed conservative policies, leaders, institutions, principles, etc, but all of these flow from a corrupted spiritual values essence. A stab at each of these should be followed by a stab at the heart. All of these need to be tied back to the original toxics polluted spiritual spring from where they originate.  The critiques need to be directed at the source with the goal of putting the beast out of it's misery.  When the Hydra dies, then all the heads wither and fade on their own.  It's a fools exercise to just attack the heads.

If the Culture of Corruption, deception based war-occupation of Iraq and the indifference based catastrophe of Katrina, etc, etc, etc, had been connected back to the original failed conservative values, we wouldn't be wasting our time talking about the personality of Sarah Palin now. We would be talking about her same old failed conservative values that led to these and other disasters. She is merely the latest head on the same beast. We would also be talking about John McCain's whole hearted embrace of these McSame failed values.  He prostrated himself in front of the conservative movement, kissed the ring of the Hydra and said, 'your values are my values' and became just another head..

Progressives are still using the same old tactics of battling the heads. Sure you do damage to the Hydra by whacking off a head or two, but it just grows them back, and they're younger and fresher and ready for continuing their culture war.  In fact, Democrats seem to be afraid of attacking the values based heart of conservatism. Conservatives don't have this problem. At the Republican National Convention, Mitt Romney and others railed against liberals. They essentially blamed liberals for all the problems in the country, as if conservatives haven't been in charge for the last 8 years. At the Democratic National Convention I didn't hear a word, not a peep, about the failed values of conservativism. Democrats just  meekly raise their hands and say, "look at us, look at us, we have values too".

Until progressives directly and forcefully take on the failure of conservative values, I don't see how we can move the country from it's disastrous course. Until the American people can clearly see the choice of values that can guide the country forward, they will have difficulty making the decision between humanity versus fear.  Making the critique and laying out the arguments and stories  is the responsibility of Democrats, Liberals and Progressives. Even if Barack Obama wins the election, the Conservative Hydra will still be there to block change and will be looking for any opportunity to take over again.

Go for the Heart.
Last year at Take Back America 2007, they held a Conservative Failure Panel. This is a first step, but it was primarily a failed conservative policy panel. It didn't go for the heart. Policies are just the actions of the Hydra, they are the way that it rolls over and tramples people, the way it exerts control, the way it destroys the environment, the way it enriches itself. The values are the essence of why it does these things. Just fighting polices is like fighting with the shadows the values cast on the wall.  The conservative movement has plenty of think tanks that do nothing but generate new policies, "You don't like my policies, well, I'll just create another one". Just critiquing policies let's conservatives off the hook. However, attack the values and it's not so easy to say, "You don't like my values, well, I'll just create another one". That takes deep soul searching.

For a presidential candidate to initiate an attack like this is difficult. It takes the progressive movement to set the stage and initiate it. They need to test it out.  Progressives need to start pointing out how conservative values fail. Progressives see the basic humanity and possibility for goodness of all people and that includes conservatives, but when there is bullying, basic injustice and corruption at the heart of conservativism, we need to point it out over and over and over again, year after year after year. That is part of being responsible. I've interviewed over 100 people on this question and they have had no problem giving example after example of how conservative values fail. It's a mater of all progressives and especially the progressive leadership, to start getting  these failures into the publics awareness.  (Hello; Obama Campaign, DFA, Moveon, PDA, Campaign for Americas Future,  bloggers, etc.)  We just need to put the words to what people have already intuitively felt from their own personal experience.

Since everyone's talking about lipstick

at the moment, I'll work it into my metaphor. The Values Voters Summit 2008 is where they put  lipstick on the Hydra of Failed Conservative Values.  Check out their website and you'll see what I mean.

And finally, to give you a visual sense of how to battle a Hydra, check out this clip of the Ancient Greek Jason, who knew a thing or two about battling the Hydra.

Failed Conservative Values
Assist us  in systematically building the arguments and telling the stories that reveal how Conservative Values have Failed. Join in our effort to create a documentary and book on the subject by contributing  articles, posts, chapters for the book and video clips. Check our website for more information and a growing outline of tasks that need to be done on this project. 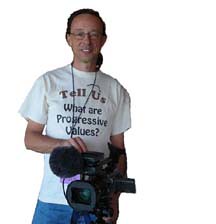 Founder of the Center for Building a Culture of Empathy. http://cultureofempathy.com The Culture of Empathy website is a growing portal for resources and information about the values of empathy and compassion. It contains articles, conferences, (more...)
Related Topic(s): Conservative Christian; Conservative Republican; Failure; Injustice; Progressive Values; Progressive Values Stories, Add Tags
Add to My Group(s)
Go To Commenting
The views expressed herein are the sole responsibility of the author and do not necessarily reflect those of this website or its editors.