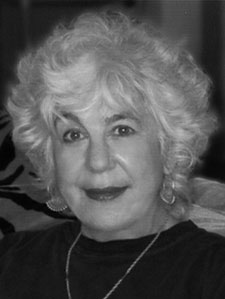 Every era has its moments that are written and evaluated by "historians." Creatives capture those same events through the prism of nuance, drama, and emotion.

Lilly Rivlin, now 84, is one such artist. A contemporary of pioneering feminists, she was on the ground to document their contributions to the upheaval of the 1970s, when women were beginning to realize that the problem wasn't them.

Rivlin's identity as an Israeli-American has also uniquely positioned her to be an active participant in seeking out a path of reconciliation in the Israel/Palestine conundrum. Her particular sensitivities paved the way for the forthright corrective statement in her 2005 interview with Amy Goodman, when she noted, "I'm Palestinian-born. That makes a difference to establish that; I was born before the state of Israel."

Her family, the Rivlins, came to Jerusalem in 1809. Recorded genealogy originated in Prague. By the 17th century, the Rivlin name was established in Lithuania. It is now deeply rooted throughout Jerusalem, where Rivlin grew up surrounded by extended family. The clan became so large they needed their own synagogue. There is a street named after Joseph Rivlin (1838-1897), who established the first Jewish neighborhoods outside the old city walls. One of the areas he founded was Mea Shearim. The current president of Israel, Reuven Rivlin, is a first cousin.

Rivlin's family moved to the United States when she was 8. Yet, as she stated in the 1983 film The Tribe, "I am drawn like a moth to the heat of the tribe."

In that documentary, she records a family reunion in Israel for 2,500 relatives, only one-fifth of her extended 10,000-member clan. Rivlin doesn't shy away from including a scene with one of her kin based in England, who changed his last name and appears less than ebullient about his lineage. "I feel constrained in Jerusalem," he informs her. He comments on the "Rivlins making a fuss about themselves." When I asked Rivlin about him, she told me that he ended up back in Israel. With a touch of humor, she said, "Rivlins leave, but always come back."

Such auspicious connections to Israel's history don't stop Rivlin from posing questions that reflect her perceptions of inequity. During a break in the festivities, Rivlin visits the Mount of Olives, home to Jewish graves for over three millennia. She inquires wryly, "Where are the women?"

Whether recording feminist history in America or featuring Israeli and Palestinian women in dialogue, Rivlin sees them as the key to shifting the equation and taking the lead.

Rivlin introduces women on both sides of the Israeli/Palestinian conflict in Can You Hear Me? (2006). Each side demands an end to the violence while looking to engage in other forms of struggle. The audience is introduced to Israeli groups like Machson (Check Point Watch) and Women in Black ­- who are involved in ending the Occupation. They are not afraid to ask, "Who lived in that house before 1948?"

They are also women brought together by mutual loss and grief. Nadwa Sarandah and Robi Damelin are the founders of the Parents Circle Family Forum. They emphasize that "all mothers are the same. Orthodox activist Leah Shakdiel (now an ordained Rabbi), who has been a constant in the religious peace movement, doesn't shy away from using the term "apartheid road."

In her films profiling American feminists, repeatedly, Rivlin is drawn to elevating female change-makers and bringing them out from under the radar. The advocacy work of these subjects is interrelated. It's all about organizing and making change.

On the occasion of Rivlin receiving the first Tikkun Olam award from Partners for Progressive Israel on March 7, I was able to interview her. (Full disclosure: It's the second event of the Women's Initiative, which I am a part of.)

Our conversation covered a full range of topics, from how she had morphed from a journalist to a filmmaker ("I always liked the visual.") to Bibi Netanyahu ("It's time for him to leave.")