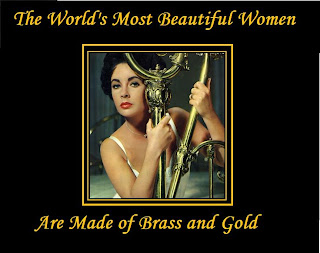 Can a woman who belonged to no particular denomination, converted to Judaism, married 8 times, played Cleopatra on screen and off, and scandalized the world with her affairs be made a saint? Benedict XVI certainly wouldn't approve, but there are many people who would nominate her and pray to her image every day.

Elizabeth Taylor was beautiful to almost everyone: in her marriages she took a stance: you had to be a strong personality, and if you thought you had to compete, then you didn't stand a chance. She attracted both sexes. She learned early on that celebrity status could be used for fun and for compassion. She proved to be what she was most proud of: a survivor. She was vulnerable to physical illness but not to critics of her choice of lifestyle. She was passionate about the people who were her friends* - and she made friends everywhere. She became devoted to helping people with AIDS at a time when many people (e.g. Mike Huckabee) wanted to quarantine the entire gay community. Her compassion seemed eternal. She seemed eternal ... and the patron saint of survivors.

But, like Benedict XVI, people noticeably shunned her... or at least her persona.

My mother, only knowing of Elizabeth Taylor's affairs and husbands, (never seeing any of her movies and not knowing of her philanthropy) called her a "high-priced wh*re." Pulpits screamed about her affair with Richard Burton and synagogues whispered of her seemingly cavalier conversion to Judaism (she was raised in Christian Science). Yes, there were a lot of people through the years who hated the very image of Elizabeth Taylor. They failed to realize that their hatred was against a persona which they themselves had helped to create: every move, every role, every outfit, every love affair was magnified ten times by the excoriations of sacred cows. To them she was a dreaded feminist, screen goddess, home wrecker, libertine, and glamorous evil that pervaded Hollywood. The more they reviled her, the more alluring she became to the American public. She was simply her own person - a person she would not have been if she had followed the dictates of a crumbling Hollywood system  and a group of self-righteous malcontents.

Some people would go to extravagant lengths to prove that St. Liz had an evil side: on  JesusIsSaviour.com  Elizabeth is aligned with the Satan because she once gave the "I love you" sign for the deaf and everyone knows that the inventor of the sign, Helen Keller, "was an occultist and Theosophist." 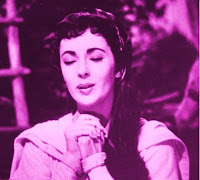 So Elizabeth Taylor will never be canonized a saint. Her image will not grace churches. Miracles will not be attributed to her. Schools will not be named after her. No one will celebrate her birthday or her feast day. People will not hawk her relics.

Elizabeth Taylor, however, is enshrined everywhere: in art (Andy Warhol's painting of her recently sold for $62 million), in film, in the annuls of charity, in history. She is also shrined in our hearts.

It will be difficult surviving without Elizabeth Taylor in our lives to tell us how to survive and help others to survive. It will be live without her presence emanating glamor and compassion. To whom can we turn to for advice on living? To whom can we turn to when we need a friend? Our friend, our mistress, our confidante is gone. Hopefully, she is still with us, observing and helping us in her own inimitable way.

Thank you, St. Liz, for everything you've done for us. Please look after us. Amen.

*She saved the life of actor Montgomery Clift: after a car crash, she saw that he was choking on something, reached into his mouth and pulled out the back teeth that were lodged in his throat. She then covered his head and yelled to the attendant paparazzi that if they didn't leave, she would personally see that they would never work in Hollywood again.

Rev. Dan Vojir is has been writing/blogging on religion and politics for the better part of ten years. A former radio talk show host (Strictly Books " Talk America Radio Network) and book publisher, Dan has connected with some of the most (more...)
Related Topic(s): Amfar; Compassion; Elizabeth Taylor; Hollywood; Love Affairs; Mike Huckabee, Add Tags
Add to My Group(s)
Go To Commenting
The views expressed herein are the sole responsibility of the author and do not necessarily reflect those of this website or its editors.