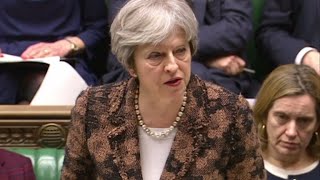 Notice that the governments of the US, UK, France, and Germany did not require any evidence to decide that the Russian government used military-grade nerve gas to attack two people on an English park bench and a UK policeman. It makes no sense. There is no Russian motive.

The motive lies in the West. It is the latest orchestration in the ongoing demonization of Russia. The demonization is a huge boost to the power and profit of the military/security complex and prevents President Trump from normalizing relations. The military/security's budget and power require a major enemy, and Russia is the designated enemy and will not be allowed to escape that assigned role.

The false accusations against Russia are damaging the Western countries that make and support the accusations. There has never any evidence provided for any of the accusations. Consider them: the Malaysian airliner, Crimea, the polonium poisoning of a Russian in the UK, Putin's alleged intention to restore the Soviet Empire, Russiagate and the stealing of the US presidential election, other charges of election theft or interference. The current Skripal poisoning. Accusations abound, but never any evidence. Eventually even insouciant Western peoples begin to wonder about the transformation of evidence-free accusations into truth.

What do leaders and peoples of the few independent and sovereign countries think when they see a signed condemnation of Russia for poisoning a long-retired UK double-agent without a scrap of evidence by the political heads of the four major Western countries? What do the Chinese think? The Iranians? The Indians? We know that the Russians are beginning to think that they are being set up by demonization for invasion, as was Saddam Hussein, Gaddafi, Assad, Yemen, and the attempt on Iran. It is finally dawning on Russia that all these accusations are not some kind of mistake that diplomacy can straighten out, but, instead, the setting up of Russia for military attack.

This is a reckless, irresponsible, and dangerous impression for the West to give Russia. Some commentators, who understand the falsity of the Skripal accusation, explain, in my view incorrectly, that UK prime minister May orchestrated the charge in order to divert attention from her Brexit difficulties. Others say, incorrectly, that it is an effort to turn the Russian election against Putin. Some have concluded that Skripal was involved in the fake "Steele dossier," and was silenced by Western intelligence, whether UK or US.

Even an astute observer, such as Moon of Alabama, has been confused by these explanations. Nevertheless I recommend his article -- which obviously was written prior to the French President, German Chancellor, and President Trump's endorsement of UK prime minister May's unsupported charges. The article shows that both US and UK experts do not think that the alleged Russian nerve agent used in the alleged poisoning even exists. Perhaps this is why the British government will not agree to any tests and can supply no evidence.

Related Topic(s): Lies Liars; Russiagate; Skripal Poisoning, Add Tags
Add to My Group(s)
Go To Commenting
The views expressed herein are the sole responsibility of the author and do not necessarily reflect those of this website or its editors.