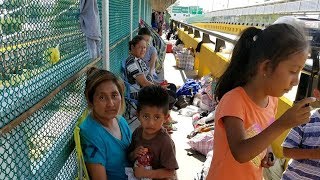 If you are inclined to view the glass as half full, you might take some solace in the transparency and self-effacing nature of Donald Trump's perpetual, shameless lying. The utter baseness of his debauchery of the truth can be seen from such a distance that it, if nothing else, leaves ample time to prepare and adjust.

A lot of critics panned Ken Burns and Lynn Novick's "The Vietnam War" as untrue to the magnitude of the horror of what the Vietnamese called "the American War." But if you really wanted to understand the enormity of human suffering that can be caused by lies told by leaders, then Burns and Novick's portrait was brutally efficient.

Tragically, we can never see the damage done by the lies in the moment. It often takes a lifetime or longer to see the full scope of the betrayal.

Then there is the glass seen as half empty. What if we cannot yet fully comprehend the human consequence of this sea of lies we are now adrift in?

At the U.S.-Mexican border, human rights abuses are occurring on an unimaginable scale. It's not me, it's not my family, but it is a great disgrace to our nation undertaken in our name.

We are at a moment in history where we can once again live with the lies and wait for it to pass, or confront our destiny on our own terms. If we have learned anything, it is that history belongs to the courageous. Specifically, the morally courageous.

Progress will not be denied. It is our destiny. We can embrace it without fear.

I would like to take a moment to give a shout out to Senatorial candidate Beto O'Rourke. Beto is running on defense of innocent victims of the Trump administration's immigration purges in a place where xenophobia and ignorance rule the day: Texas. This guy isn't worried about what he's supposed to say to become Senator. He is saying what his conscience dictates he must.

This is a great struggle that I'm proud to be a part of.

Related Topic(s): Horror; Immigration; Rights; Suffering, Add Tags
Add to My Group(s)
Go To Commenting
The views expressed herein are the sole responsibility of the author and do not necessarily reflect those of this website or its editors.