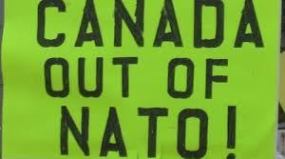 Final in a four-part series on the 70thanniversary of the North Atlantic Treaty Organization.

The first two installments discussed how NATO was set up to blunt the European left and to enable global dominance while the third focused on NATO's role in spurring conflict and military spending. This article details the Left's relationship with NATO.

The Co-operative Commonwealth Federation (CCF), the NDP's predecessor, backed NATO. In early 1949 the National Council of the party announced, "the CCF believes that Canada should support and join a North Atlantic security pact." At its 1950 convention the party passed a resolution supporting NATO and, in coded reference to his aggressive response to its opponents, long time party secretary David Lewis writes, "the NATO issue did not disappear. It had to be dealt with at every subsequent convention, and always produced one of the most heated debates." Army Captain and party advisor Desmond Morton describes the battle over a compromise resolution on military alliances at the NDP's founding convention in 1961. The motion to abandon NORAD, but stay in NATO, was "subjected to a bitter, emotional attack from the floor. As they had done in so many CCF conventions, [MJ] Coldwell, [Tommy] Douglas and Lewis came to the microphones to hammer back the unilateralists."

Party leaders did not only employ the power of persuasion. In addition to benefiting from the dominant ideological winds, the leadership employed the levers of power within the party. On one occasion, Coldwell threatened to resign as party leader if members did not support the North Atlantic treaty. When a group of Manitoba CCF members, including individuals elected to the provincial legislature, organized an anti-NATO group the provincial secretary blocked their access to the party's mailing list. Federal MP and future party leader, Stanley Knowles also intervened to pressure the Manitoba CCF to punish prominent opponents of NATO and the provincial party expelled two former members of the Manitoba legislature for campaigning against the North Atlantic accord.

Two decades after its creation the NDP finally called on Ottawa to withdraw from NATO. But, its 1969 position was partially reversed in the mid-1980s, culminating in a 1987 "security" policy paper that equivocated on the subject. When members have submitted resolutions critical of NATO at recent NDP conventions they have been buried. In a 2015 federal election debate party leader Tom Mulcair called the NDP "proud members of NATO" and said his government would make the alliance a "cornerstone" of its foreign policy. There's little indication that new leader Jagmeet Singh has changed the party's position.

On the eve of the 1980 referendum the Parti Que'becois' 1979 White Paper (Que'bec-Canada: A New Deal. The Que'bec Government Proposal for a New Partnership Between Equals: Sovereignty-Association) said an independent Que'bec would continue its membership in NATO. More recently, the PQ's 2012 election platform pledged to remain in NATO. In its platform Que'bec's other main sovereigntist party, Que'bec Solidaire, calls for "Canada's immediate withdrawal from NATO and NORAD."

The Green Party has questioned "maintaining membership in NATO" and called for "shifting our focus away from NATO war missions towards UN Peacekeeping contributions", but they don't appear to have explicitly asked to withdraw from the alliance. The Communist Party and other smaller Left parties have called for withdrawing from NATO.

For decades the 'house of labour' backed NATO. The Canadian Labour Congress' predecessors the Canadian Congress of Labour and Trades and Labour Congress supported the formation of NATO and the CLC's inaugural convention called on the "Canadian government not to falter or fail in its support of NATO", which it described as a measure for "self-protection against aggression." In 1957 the CLC "reiterated its support of NATO in the memorandum submitted to the government of Canada." As part of an effort to promote the military alliance, the newly formed labour federation distributed 11,000 copies of a booklet titled "The Trade Unions and NATO". The pamphlet explained, "unfortunately we still do have to spend large sums on defence, and the responsibility for the fact rests with international communism. Canadian labour firmly supports NATO."

Through the 1960s the CLC continued to back NATO. It wasn't until 1976 that the CLC "urged the federal government to " deemphasize the military role of the North Atlantic organization." In recent years the CLC and its affiliates have said little about NATO.

A number of peace organizations Pugwash Canada, Project Ploughshares, etc. have taken ambiguous positions towards NATO. The president of the antiwar Rideau Institute Peggy Mason attended all NATO Council meetings when she was a lead adviser to Progressive Conservative MP and foreign minister Joe Clark from 1984 to 1989. During a 2012 National Defence Committee parliamentary meeting Mason noted, "I'm talking as someone who has spent the better part of the last 10 years working with NATO." The Rideau Institute president trained NATO commanders for peace and crisis stabilization operations and, according to Mason's LinkedIn profile, continued in this role after taking over RI.

For their parts, the Canadian Peace Congress, Canadian Voice of Women for Peace, Canadian Peace Alliance and others openly call for Canada to withdraw from NATO, which shouldn't be a controversial position for progressive organizations.

Though it would elicit howls of outrage from the militarists, withdrawing from NATO would not be particularly radical. European countries such as Sweden and Finland aren't part of the alliance, nor are former British dominions Australia and New Zealand, not to mention Canada's NAFTA and G7 partners Mexico and Japan. Still, withdrawing from NATO would dampen pressure to spend on the military and to commit acts of aggression in service of the US-led world order. It's long past time to do so.

Related Topic(s): NATO Combat Caveats, Add Tags
Add to My Group(s)
Go To Commenting
The views expressed herein are the sole responsibility of the author and do not necessarily reflect those of this website or its editors.