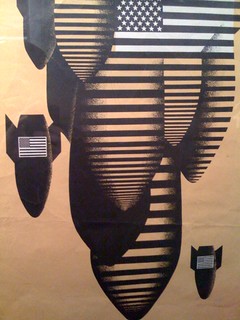 Since 9/11 the US government has spent more than 1.5 trillion dollars on the War on Terror. Fourteen nations have been bombed or attacked by the US military, and we are no safer today than we were one day prior to 9/11. As a matter of fact, we are probably less safe with the world being torn apart by US bombs and the spreading of anarchy throughout the Middle East, yet the definition of insanity is doing the same thing over and over again with the same results.

We have an insane policy of bloodletting and killing, thinking this will make the problem go away, but as any rational person knows the more people you kill the more enemies you create. Every time you kill someone with a drone bomb, you create 10 new enemies. Gen. Stanley McChrystal, the onetime commander of all coalition forces in Afghanistan, created the phrase "Insurgent Math" when he rightfully pointed out "for every innocent person you kill, you create 10 new enemies." Every rational person would probably agree with McChrystal's assessment, but the US government doesn't, and we continue to make the same mistakes of killing innocents and thinking we can "kill our way to victory". The big question is; are we really as stupid as we seem by repeating a fruitless useless policy, or are the decision makers bright enough to realize that their policy only insures constant warfare, which just might be the game plan. Sound silly? Then think about a different policy, and the result, if we tried a sane approach to dealing with the world's nations.

Let us assume that intelligent folk realized you cannot kill your way to victory and embarked on a completely different policy to fight the war on terror. What if the US government set aside 1.5 trillion dollars, the conservative estimate of our spending in the war on terror so far, and decided to build schools instead? Think about it. What if we built one hundred thousand schools in Afghanistan after 9/11? Do you think the Taliban would have the same kind of public support from Afghanis?

What if instead of spending 1.5 trillion on bombs and making war while killing well over 1 million people, we helped build infrastructure instead. Do you really think they would "hate us for our freedom", probably the most asinine statement ever made by any US President, and try to kill us? Yes folks we have killed over one million people since 9/11, and using McChrystal's accurate ratio, we have created over 10 million enemies since 9/11. This is insanity.

We bombed Libya for seven months, saying it was necessary for "humanitarian" reasons, another classically stupid expression which mainstream media, the mouthpiece of the US government, readily accepted and used,without pointing out the total absurdity of bombing people for humanitarian reasons.

What would have happened, if instead of bombing Libya for 7 months and turning it into a failed state with chaos and anarchy resulting, which led to the emergence of ultra-extremist groups who now threaten the world with violence, we decided to use some of the 1.5 trillion dollars to build 5,000 hospitals in Libya? Do you think they would still "hate us for our freedom", and would want to kill us?

What if instead of encouraging Saudi Arabia to bomb Yemen, and supplying them with target information and the weapons used to bomb Yemen into oblivion, we used some of the 1.5 trillion to irrigate land so they did not have to import all their food. Would they hate us as they do now for using drones to kill innocent people in their country, for supporting brutal dictators in their country, for giving those dictators the weapons to keep Yemenis "in their place", and for supporting Saudi Arabia's massive bombing of their country?

And finally, we are able to find the money to "bomb" groups in Syria, but cannot find the money to help feed and supply the people of Syria, in one biggest humanitarian crises in the world. We continue our insane policy of using drones in Pakistan, which is causing anti-American hatred in one of the largest nations on the planet and armed with nuclear weapons, while China quietly agreed to build a gas pipeline that will link Iran with energy starved Pakistan. The gas pipeline will cost about $2 billion and China has agreed to pay for 85% of the project and it is to be called "the Peace Pipeline".

We kill; they build.

Let's try sanity for a change.

Related Topic(s): Food Not Bombs; Iraq War; War With China, Add Tags
Add to My Group(s)
Go To Commenting
The views expressed herein are the sole responsibility of the author and do not necessarily reflect those of this website or its editors.