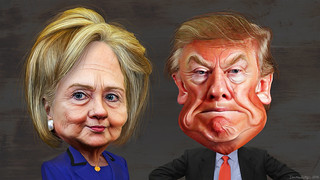 There's probably never been a US presidential election where both likely nominees are more despised by more people. Millions on both sides plan to vote for the least despicable candidate. Do you need more proof our political system is corrupt to the core? If you're a Hillary Clinton supporter and plan to vote for her, that's fine. But Bernie Sanders supporters are being pressured and shamed into voting for Clinton. This "pragmatic" lesser of two evils tactic may work for the short term, but it will just embolden establishment politics and undermine future chances for real progressive change.

Even if your vote helps defeat Trump you're clearly telling Democratic party elites they can confidently betray your concerns as long as they offer you someone marginally better than the Republican alternative. Where will it end? The Democratic Party will just continue to betray progressive causes with impunity. Progressives should say enough is enough and put moral principles above short-term political expediency.

The Democratic Party elites are going out of their way with all manner of dirty tricks to stack the deck for Clinton. They're counting on Sanders supporters to "feel the guilt" if they dare to not vote for their chosen one. But if Trump wins, it won't be the fault of Sanders supporters voting their conscience. It will be the fault of party elites trying to force an establishment faux progressive down the throats of true progressives knowing full well their choice will alienate millions of progressive Democrats and independents while bringing Trump supporters out in droves.

Like Clinton supporters, Sanders supporters have every right to vote for someone based on their moral principles. Sanders supporters shouldn't be coerced to compromise their moral principles and merely vote against someone. Democratic Party elites are blackmailing them by claiming, "if you don't vote for our chosen one, it's your fault if Trump wins." No, it's the fault of the Democratic Party for ignoring and marginalizing progressives. If it were really about beating Trump, party elites would change their allegiance to Sanders who would beat Trump more handily than Clinton according to multiple polls.

The onus is on the Democratic Party to promote someone who is worthy of your vote. The party elites shouldn't expect to be exonerated for second-rate judgment by getting Sanders supporters to violate their moral principles and vote for the lesser of two evils.

Carmen Yarrusso, a software engineer for 35 years, designed and modified computer operating systems (including Internet software). He has a BS in physics and studied game theory and formal logic during his years with the math department at (more...)
Related Topic(s): Corrupt Special Interests; Democratic; Establishment; Lesser Evil Lesser Evilism; Lesser Of Two Evils; Reform; Voter Fraud, Add Tags
Add to My Group(s)
Go To Commenting
The views expressed herein are the sole responsibility of the author and do not necessarily reflect those of this website or its editors.

Wikiarguments: A practical plan to get big money out of politics

A Manifesto for the Impending Second American Revolution

Why a peaceful, people's revolution is the only way to take back our government

Satire: Study Concludes Americans Are the Stupidest People on the Planet