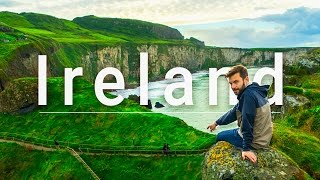 From Dublin to Belfast and everything in between.
(Image by YouTube, Channel: vagabrothers)   Details   DMCA

This tiny village in the heart of County Limerick, with its narrow streets and multiple churches, seems untouched by time and untroubled by the economic and political cross currents tearing away at the European Union (EU). But Ireland can be a deceptive place, and these days nowhere is immune from what happens in Barcelona, Paris and Berlin.

Ballingarry -- the place my grandfather emigrated from 126 years ago -- was a textile center before the 1845 potato famine starved to death or scattered its residents. Today it houses five pubs, "One for every 100 people" notes my third cousin Caroline, who, along with her husband John, live next to an old Protestant church that has been taken over by a high tech company.

When the American and European economies crashed in 2008, Ireland was especially victimized. Strong-armed into a "bailout" to save its banks and speculators, the Republic is only beginning to emerge from almost a decade of tax hikes, layoffs, and austerity policies that impoverished a significant section of its population. The crisis also re-ignited the island's major export: people, particularly its young. Between 2008 and 2016, an average of 30,000 people, age 15 to 24, left each year.

The Irish economy is growing again, but the country is still burdened by a massive debt, whose repayment drains capital from much needed investments in housing, education and infrastructure. But "debt" can be a deceptive word. It is not the result of a spending spree, but the fallout from a huge real estate bubble pumped up by German, Dutch and French banks in cahoots with local speculators and politicians, who turned the Irish economy into an enormous casino. From 1999 to 2007, Irish real estate prices jumped 500 percent.

People here have reason to be wary of official government press releases and Bank of Ireland predictions. The center-right government of former Prime Minister Enda Kenny crowed that the economy had grown an astounding 26 percent in 2015, but it turned out to be nothing more than a bunch of multinationals moving their intellectual property into Ireland to protect their profits. The forecast has since been labeled "Leprechaun economics."

Former U.S. Speaker of the House, Thomas "Tip" O'Neill -- whose ancestors hailed from County Donegal in Ireland's northwest -- once said, "All politics are local," and that's at least partly true here. The news outlets are full of a scandal about the Irish police, the Garda, cooking breathalyzer tests to arrest motorists, an upcoming abortion referendum, and a change of leadership in the left-wing Sinn Fein Party.

There is also deep concern about the Brexit. Britain is Ireland's number two trading partner -- the U.S. is number one -- and it is not clear how London's exit from the EU will affect that. There is also the worrisome matter of the now open border between the Republic and Northern Ireland, accompanied by fears that Brexit will undermine the Good Friday peace agreement between northern Catholics and Protestants.

Conn M. Hallinan is a columnist for Foreign Policy In Focus, "A Think Tank Without Walls, and an independent journalist. He holds a PhD in Anthropology from the University of California, Berkeley. He oversaw the (more...)
Related Topic(s): Brexit; Economy; Immigration; Irish; Nazis; Politicians, Add Tags
Add to My Group(s)
Go To Commenting
The views expressed herein are the sole responsibility of the author and do not necessarily reflect those of this website or its editors.