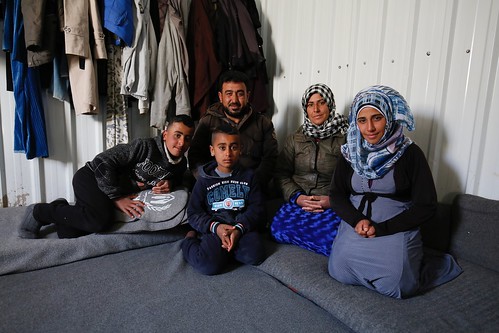 It was midday on Sunday, May 7th, when the U.S.-led coalition warplanes again began bombing the neighborhood of Wassim Abdo's family.

They lived in Tabqa, a small city on the banks of the Euphrates River in northern Syria. Then occupied by the Islamic State (ISIS, also known as Daesh), Tabqa was also under siege by U.S.-backed troops and being hit by daily artillery fire from U.S. Marines, as well as U.S.-led coalition airstrikes. The city, the second largest in Raqqa Province, was home to an airfield and the coveted Tabqa Dam. It was also the last place in the region the U.S.-backed forces needed to take before launching their much-anticipated offensive against the Islamic State's self-proclaimed capital, Raqqa.

His parents, Muhammed and Salam, had already fled their home once when the building adjacent to their house was bombed, Wassim Abdo told me in a recent interview. ISIS had been arresting civilians from their neighborhood for trying to flee the city. So on that Sunday, the couple was taking shelter on the second floor of a four-story flat along with other family members when a U.S.-led airstrike reportedly struck the front half of the building. Abdo's sister-in-law Lama fled the structure with her two children and survived. But his parents and 12-year-old cousin were killed, along with dozens of their neighbors, as the concrete collapsed on them.

As an exiled human rights activist, Wassim Abdo only learned of his parents' death three days later, after Lama called him from the Syrian border town of Kobane, where she and her two children had been transported for medical treatment. Her daughter had been wounded in the bombing and although the U.S.-backed, Kurdish-led troops had by then seized control of Tabqa, it was impossible for her daughter to be treated in their hometown, because weeks of U.S.-led coalition bombing had destroyed all the hospitals in the city.

A War Against Civilians

Islamic State fighters have now essentially been defeated in Mosul after a nine-month, U.S.-backed campaign that destroyed significant parts of Iraq's second largest city, killing up to 40,000 civilians and forcing as many as one million more people from their homes. Now, the United States is focusing its energies -- and warplanes -- on ISIS-occupied areas of eastern Syria in an offensive dubbed "Wrath of the Euphrates."

The Islamic State's brutal treatment of civilians in Syria has been well reported and publicized. And according to Lieutenant General Stephen Townsend, the commander of the U.S.-led war against ISIS in Iraq and Syria, the battle to "liberate" these regions from ISIS is the "most precise campaign in the history of warfare."

But reports and photographs from Syrian journalists and activists, as well as first-person accounts from those with family members living in areas under U.S. bombardment, detail a strikingly different tale of the American offensive -- one that looks a lot less like a battle against the Islamic State and a lot more like a war on civilians.

These human rights groups and local reporters say that, across Syria in recent months, the U.S.-led coalition and U.S. Marines have bombed or shelled at least 12 schools, including primary schools and a girls' high school; a health clinic and an obstetrics hospital; Raqqa's Science College; residential neighborhoods; bakeries; post offices; a car wash; at least 15 mosques; a cultural center; a gas station; cars carrying civilians to the hospital; a funeral; water tanks; at least 15 bridges; a makeshift refugee camp; the ancient Rafiqah Wall that dates back to the eighth century; and an Internet cafe' in Raqqa, where a Syrian media activist was killed as he was trying to smuggle news out of the besieged city.

The United States is now one of the deadliest warring parties in Syria. In May and June combined, the U.S.-led coalition killed more civilians than the Assad regime, the Russians, or ISIS, according to the Syrian Network for Human Rights, a nongovernmental organization that has been monitoring the death toll and human rights violations in Syria since 2011.

"This administration wants to achieve a quick victory," Dr. Fadel Abdul Ghany, chairman of the Syrian Network for Human Rights recently told me, referring to the Trump White House. "What we are noticing is that the U.S. is targeting and killing without taking into consideration the benefits for the military and the collateral damage for the civilians. This, of course, amounts to war crimes."

And nowhere is this war against civilians more acute than in ISIS-occupied Raqqa, where trapped families are living under dozens of airstrikes every day.

Hotel of the Revolution

Located at the confluence of the Euphrates and Balikh rivers in northern Syria, Raqqa was first settled more than 5,000 years ago. By the late eighth century, it had grown into an imperial city, filled with orchards, palaces, canals, reception halls, and a hippodrome for horse racing. Its industrial quarters were then known as "the burning Raqqa," thanks to the flames and thick smoke produced by its glass and ceramic furnaces. The city even served briefly as the capital of the vast Abbasid Empire stretching from North Africa to Central Asia.

Toward the end of the thirteenth century, wars between the Mongol and Mamluk empires annihilated Raqqa and its surrounding countryside. Every single resident of the city was either killed or expelled. According to Hamburg University professor Stefan Heidemann, who has worked on a number of excavations in and around Raqqa, the scorched-earth warfare was so extreme that not a single tree was left standing in the region.