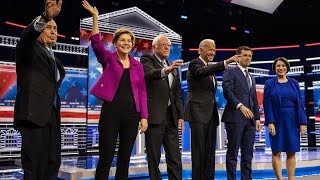 Wednesday night's presidential debate in Las Vegas, Nevada, strongly suggests that the Democratic Party is headed for a political debacle at its presidential nominating convention in Milwaukee this summer, as a half-dozen right-wing candidates gang up in an effort to deprive Vermont Senator Bernie Sanders of the nomination.

The media coverage of the two-hour debate focused on the rehearsed insults and sound bites deployed by the six candidates on the stage against each other -- with the biggest blows hitting billionaire Michael Bloomberg, participating in his first debate -- and on speculation about which candidates might benefit from their debate performance in the polls and in fund-raising.

But the most important incident at the debate came at the very end, when the candidates were asked about the now increasingly likely scenario, with convention delegates divided up among four, five or even six candidates, that no candidate wins an outright majority. Should the candidate with the most delegates, albeit less than a majority, become the nominee?

Sanders said yes. All the others -- Bloomberg, former Vice President Joe Biden, Senator Elizabeth Warren, Senator Amy Klobuchar, and former South Bend Mayor Pete Buttigieg -- said no, declaring that the "process" of the nominating convention must be allowed to play out.

This answer demonstrates two important political facts: the self-styled "democratic socialist" Sanders is viewed as the front-runner and is expected to win the most delegates; and his opponents are prepared to join forces and engage in backroom maneuvers to block his nomination.

In acknowledging that Sanders has emerged as the leading candidate for the nomination, his rivals are admitting an incontestable fact. Sanders now leads in the national polls and in most state polls, including Nevada, where caucuses take place Saturday, and in the most important states voting March 3, "Super Tuesday," including California, Texas, North Carolina and Virginia.

In a poll conducted for the Washington Post and ABC television network, Sanders was supported by 32 percent, compared to 16 percent for Biden, his closest rival. Bloomberg followed with 14 percent, Warren 12 percent, Buttigieg 8 percent and Klobuchar 7 percent. Sanders led among men and women, those with a college education and those without, and among Latinos, and he was a close second to Biden among African-Americans.

Most revealing was the age breakdown: among Democratic voters under 50 years old, Sanders had the support of a clear majority. Among the youth, his support approaches a landslide. These figures are a distorted reflection of a pronounced shift to the left among American workers and youth, looking for an alternative to corporate domination, gaping economic inequality, and the mounting threat of war.

Writing in the Post, Dan Balz observed, "One measure of how rapidly things are changing is this: In barely a week, the question has shifted from whether Sanders has a ceiling, based on the fact that he managed just a quarter of the vote in both Iowa and New Hampshire, to whether he can be stopped. The answer to that question could be known as early as Super Tuesday, less than two weeks away."

In invoking the "process" required to select a nominee, the Democratic candidates are referring to the rule established by the Democratic National Committee that allows nearly 800 unelected "super-delegates" to be seated at the convention, comprised of Democratic congressmen, senators, governors and other current and former officials, as well as all the members of the DNC itself.

These super-delegates are barred from voting for a presidential nominee on the first ballot. But if no candidate wins a majority, super-delegates will vote in the second ballot, and would likely play the decisive role in selecting a nominee other than Sanders.

This is only the expression in the language of convention delegate arithmetic of a more basic political truth: it is absurd to claim, as Sanders does, that the Democratic Party can be transformed into a vehicle for "political revolution" or become the basis for building a movement for vast and progressive change in the United States.

The Democratic Party is a capitalist party, unshakably committed to the defense of the profit system and the global interests of American imperialism. That is true whether its presidential candidate is the billionaire Bloomberg, the longtime Washington operative Biden, the left-talking Senator Warren " or Sanders himself, whose talk of "socialism" is nothing more than a "left" label for policies of liberal reform modeled on those of Franklin Roosevelt, the leader of American imperialism in its heyday.

The debate itself demonstrated the basic class orientation of the Democratic Party. As usual in these affairs, but perhaps more strongly than any previous debate, nearly all significant issues of foreign and domestic policy were excluded. There were only a handful of references to the deepening social crisis in America, the harrowing conditions of life facing tens of millions of workers and youth, and the turn to police-state methods by the Trump administration.

Patrick Martin writes for the World Socialist Website (wsws.org), a forum for socialist ideas & analysis & published by the International Committee of the Fourth International (ICFI).
Related Topic(s): Bernie Sanders; Delegates; Democratic Party; Democratic Socialist; Las Vegas Debate; Socialism, Add Tags
Add to My Group(s)
Go To Commenting
The views expressed herein are the sole responsibility of the author and do not necessarily reflect those of this website or its editors.