Democrat Conor Lamb and organized labor make for a winning combination in a long-time red district. 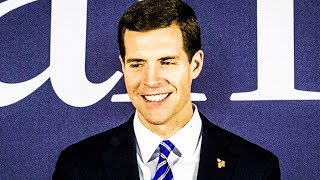 On Tuesday in Western Pennsylvania, a novice candidate, a 33-year-old Democrat who had never before run for office, upset an experienced politician who President Donald Trump, Ivanka Trump and Donald Trump Jr. all stumped for and who received more than $10 million from dark money groups and the Republican Party.

Not only that, the rookie did it in a congressional district that was gerrymandered to elect Republicans for life, a district that went for Trump, Mitt Romney and John McCain.

Democrat Conor Lamb defeated Republican Rick Saccone in Pennsylvania's 18th District, which had sent a Republican to Congress for the past 15 years.

The shocker resulted from a winning combination. Organized labor worked for the candidate who pledged to work for labor. That candidate, of course, was Conor Lamb.

Lamb did not view unions as boogey men to fear and run from. He saw them as friends to run and win with.

In his victory speech, Lamb acknowledged the role organized labor played in putting him some 600 votes over the top in a district that had gone for Trump by 20 points. Lamb said organized labor "was the heart and soul" of his campaign and he would not forget it. "Side by side with us at each step of the way were the men and women in organized labor," he said.

Lamb's win illustrates that the manufacturing middle of the country and working-class voters who went for Trump nationwide do not belong to him or to Republicans.

In the week before the election, hundreds of United Steelworkers, United Mine Workers of America and Carpenters attended three rallies for Lamb, including one that featured former Vice President Joe Biden who said Lamb would "throw himself in front of a train" to protect the working class from Republican-backed plans to cut Social Security, Medicare and Medicaid.

Candidates like Saccone, who ignore, insult or injure blue-collar workers and union members, do so at their peril. Mike Mikus, a Western Pennsylvania political consultant, said, "What this race shows... is that labor is still very relevant and still has a lot of clout and the ability to organize and affect elections."

Related Topic(s): Conor Lamb; Democrats; Issues; Labor Rights; Labor-Unions; Workers, Add Tags
Add to My Group(s)
Go To Commenting
The views expressed herein are the sole responsibility of the author and do not necessarily reflect those of this website or its editors.