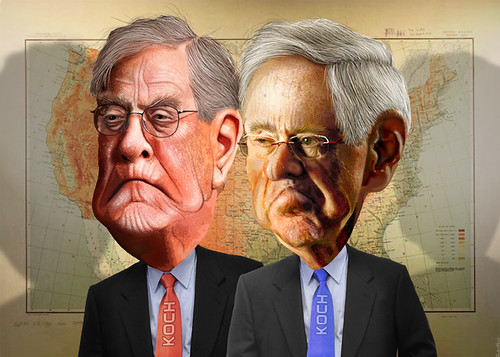 This headline appeared on Monday, July 31, 2017, at precisely 4:00 am: "Koch Brothers Move to Back White House's Tax-Cut Plan." This one appeared less than 12 hours later: "White House sees tax reform zipping through Congress in October, November."

That's what you get when you combine the Kochs' money and influence with Trump's executive power and support from the Republican base: a unified Republican Party marching in lockstep toward a destructive goal.

The Kochs' much-publicized hostility toward Donald Trump has been replaced by a strategic alliance between the ideologically extreme billionaire brothers and the ideologically fluid but equally self-serving businessman/president. They have reached "new-found unity" around an issue that is guaranteed to excite all Republican politicians; tax cuts that would benefit Trump, most members of his cabinet -- and, of course, the Koch brothers themselves.

They don't call them "cuts," of course. That would sound crass. Instead, in time-worn Republican fashion, they hide their selfishness behind a more refined word: "reform."

"Social Security reform," "Medicare reform," "tax reform" -- when Republicans say they want to "reform" something, the only thing you can be sure of is that the wealthy will benefit and everyone else will suffer.

Longtime Koch operative Marc Short was given a key role in the Trump White House. As Legislative Director, Short works with Republicans in Congress to promote the passage of Trump's agenda -- or, in this case, the Trump/Koch agenda.

When it comes to taxation, the Kochs seem to be the senior partner in this relationship. Steve Bannon's proposal for a millionaire tax increase was quickly shot down. So was House Speaker Paul Ryan's proposal for a "border adjustment tax," which the billionaires brothers strongly opposed.

What remained was a "reform" plan any self-serving billionaire could love. Virtually all of the cuts -- 99.6 percent of them -- would go to the top 1 percent, according to Americans for Tax Fairness, cutting approximately $1.5 trillion from Medicaid while giving roughly $2 trillion in tax cuts to corporations. The House's "reform" plan would also cut nearly $500 billion from Medicare.

These cuts will make you sick -- perhaps literally. They would hurt millions of older Americans, including the two-thirds of nursing home patients who rely on Medicaid for their care. Their tax cuts would also be bad for the country's economic health. As the experience of recent years has confirmed, government spending cuts also slow economic growth and increase the risk of recession.

Two Koch-backed groups, Freedom Partners and Americans for Prosperity, sponsored an event on Monday to advance the Koch/Trump/GOP tax cuts. Joining Short on the speaker's list was Trump's Treasury Secretary Steve Mnuchin, the ruthless and unethical "foreclosure king" and former Goldman Sachs partner. Mnuchin, although not quite a billionaire himself, is very wealthy and would benefit greatly from these tax cuts too.

Mnuchin peddled the usual GOP snake-oil at the conference. "This is about creating jobs," Mnuchin said, "this is about creating wage growth, this is about a simpler and fairer tax system." That's what they said after they passed the last round of millionaire and billionaire tax cuts under George W. Bush. Wages stayed stagnant under Bush, and job creation slowed dramatically even before the financial crisis of 2007-2008.

The Kochs' "multi-million dollar campaign" to promote tax cuts is just getting started. They are running digital ads and will hold another tax-cut event on Wednesday, August 2, featuring far-right "Freedom Caucus" Rep. Mark Meadows (R-NC). Can they really get their agenda passed by November? "So that, I think, is an aggressive schedule, but that is our timetable," Short told attendees at Monday's event, adding: "I think we're in for a long fall, legislative calendar-wise."

Americans may be in for a long fall "health-wise" and "economy-wise," too.

Related Topic(s): Billionaires; Koch Brothers; Medicaid; Medicare; Taxes, Add Tags
Add to My Group(s)
Go To Commenting
The views expressed herein are the sole responsibility of the author and do not necessarily reflect those of this website or its editors.