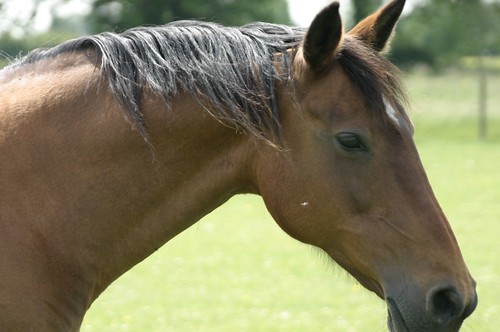 Stock Photo of a Horse
(Image by jonathan_siberry)   Details   DMCA

Sadly, there are people in this world who don't seem to even begin to know the meaning of the word compassion. Today Equine Voices Rescue Sanctuary sent the account of Kachina, an innocent horse having two such people in her life.

How Gordon Bates got this beautiful and sweet mare is not revealed, but her story with him began when he tried to load her into his trailer. Not having been trained to do this, Kachina resisted being loaded into the trailer. All she probably needed was patience and some training, but no, Bates thought he had a better solution. He would tie her to the back of his truck and drag her home.

His 13 year-old daughter seems to have been as hard-hearted as her father, who told her to give the chains on Kachina a hard yank to make sure they were secure. Then they both got in their truck and headed down the country road dragging Kachina behind. The writer wasn't sure how long Kachina was able to keep up with the truck. Was it a mile, 5 miles, 10 miles? But eventually she was unable to keep up with the speed of the truck and collapsed.

Bates didn't stop, and he kept driving for miles, dragging poor Kachina behind, knowing this poor horse was being dragged, he finally stopped, but not to help Kachina. He told his daughter to get out and give her a good kick. And this dutiful, cruel daughter kicked Kachina in the nose over and over again.

Because Kachina was in terrible pain, she was unable to get up. Then Bates grabbed a PVC pipe from his truck and started slamming Kachina over the head as his daughter continued to kick poor Kachina.

Thankfully, someone called 911 when they saw Kachina being dragged behind the truck. The policeman had no difficulty finding them as he followed the trail of horse blood streaking across the road. When he found Bates and his daughter beating on a defenseless animal, he arrested the father for animal cruelty.

Animal control brought Kuchina to a holding facility. Kachina was going to be sold at a local auction, where probably a meat merchant would ship her to Mexico for slaughter. But Equine Voices Rescue found out about her and all the suffering she went through.

Karen Pomeroy of EVR headed to the animal control holding pen to rescue Kachina. Kachina was in bad shape from the suffering inflicted by the Gates. After being taken to the sanctuary, it took her a long time to trust Karen at all. She would flinch with fear with every human touch, but slowly and surely, Kachina began to trust and show them what a sweet kind girl she was.

As for the monster Bates, it's hard to believe but he got off scot-free, even though a police officer witnessed him drag and beat this poor horse. He didn't even get a slap on the wrist. Shame on our court system.

Karen Pomeroy of Equine Voices Rescue enclosed a "Let the Punishment Fit the Crime" petition. Of course, I was only too happy to sign it. I hope everyone who also received it did so as well.

Animals like Kachina deserve to be treated compassionately, and infractions should be punished by law. We should not let criminals like Bates go scot free to commit other crimes of cruelty to other innocent animals.

Related Topic(s): Auction; Blood; Compassion; Cruelty; Innocent; Law; Monster; Police; Sanctuary; Shame; (more...) Slaughter; Suffering; Training, Add Tags  (less...)
Add to My Group(s)
Go To Commenting
The views expressed herein are the sole responsibility of the author and do not necessarily reflect those of this website or its editors.