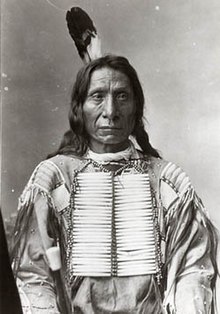 The current US President began Independence Day celebrations on July 3 with a rousing message of White Supremacy on the deeply sacred and stolen land of the Lakota Sioux, at Mount Rushmore. The festivities included an Air Force One flyover and fireworks on land so excessively dry that it has been closed to fireworks for over a decade due to the dangerous potential for wildfires.

The Black Hills area is the sacred center of the Lakota cosmos. 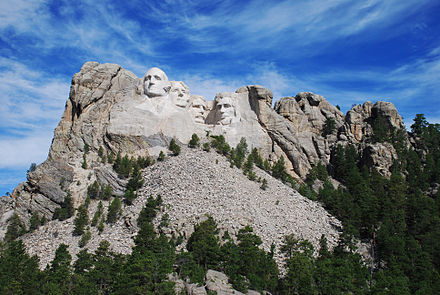 Native Americans and supporters blocked the road to their defaced sacred lands, which delayed the presidential promotional event for several hours.

In an 1868 treaty, the US Government promised the sacred land of the Black Hills to the Sioux in perpetuity. But gold was discovered less than a decade later, so the US government changed its mind, and took the lands by force, ending with the massacre at Wounded Knee in 1890. After the 7th U.S. Cavalry division slaughtered hundreds of unarmed Lakota, mostly women and children, the U.S. government awarded 20 soldiers with the highest form of recognition, the Medal of Honor. First Americans have asked for these Medals of Honor, given as rewards for genocide, be rescinded. This is especially poignant in the light of the fact that Native Americans have a history of service in our nation's military that is disproportionally much larger than their percentage of the overall population.

Every one of over 500 treaties between the US Government and Indigenous Peoples entered into between 1778-1871 has been broken. Every. Single. One.

Nick Tilsen, a member of the Oglala Lakota, told CBS, "Mount Rushmore is a symbol of white supremacy, of structural racism that's still alive and well in society today... It's an injustice to actively steal Indigenous people's land then carve the white faces of the conquerors who committed genocide."

Tribal leaders have called for the removal of the defacement of their sacred mountain, while Trump has reportedly expressed a desire to have his own face added to the monument.

In the 1920s, South Dakota historian Doane Robinson, in an effort to promote tourism, had the idea of carving likenesses of noted figures into the mountains of the Black Hills of South Dakota. His wanted to feature heroes of the American West, such as Lewis and Clark, their expedition guide Sacagawea, Oglala Lakota chief Red Cloud, Buffalo Bill Cody, and Oglala Lakota chief Crazy Horse.

Gutzon Borglum also sculpted the confederates on Stone Mountain in Georgia, a project which was primarily funded by the Ku Klux Klan. The largest bas-relief sculpture in the world, it depicts Jefferson Davis, Robert E. Lee, and Stonewall Jackson. The entire carved surface measures 1.57 acres. 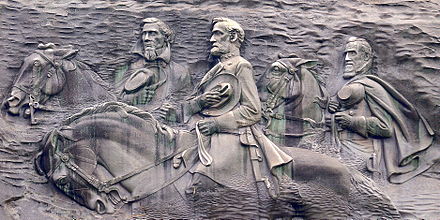 An active member of the KKK, Borglum attended rallies, served on Klan committees and was named to the Kloncilium, the highest national council of the Klan, in 1923.

Related Topic(s): Genocide; July 4th; July Fourth; July The Fourth; Native American Issues; White Male Privilege; White Nationalism; White Supremacy, Add Tags
Add to My Group(s)
Go To Commenting
The views expressed herein are the sole responsibility of the author and do not necessarily reflect those of this website or its editors.

STAY IN THE KNOW
If you've enjoyed this, sign up for our daily or weekly newsletter to get lots of great progressive content.
Series: "Native American Issues"