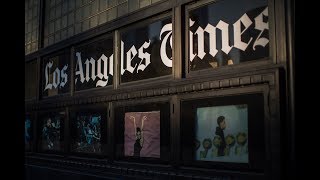 I have written extensively about my lawsuit against the LA Times. As I prepare for the next, do-or-die, stage of my case, it's time to explain why Rall v. Los Angeles Times et al.has broad implications beyond me personally.

Freedom of the press is at stake.

The subtle yet fundamental question here is: whoneeds freedom of the press? The obvious answer is journalists: reporters and pundits. But journalists' freedom to report and editorialize is in grave danger from a surprising enemy: their employers.

Once was, reporters like Woodward and Bernstein were on the same side as their employers. In this age of corporate aggregation of newspapers and other media outlets by publicly-traded media corporations and individual billionaires, however, newspapers and other media outlets are often compromised by their quest for profits, as the LA Times' parent company was when it allowed its stock to be sold to the LAPD pension fund. In this struggle the media companies have framed themselves as guardians of press freedom at the expense of journalists, ironically securing the power to screw journalists in the guise of First Amendment protections.

If the California Supreme Court refuses to hear my case which is probably what will happen, or hears it and rules for the Times' anti-SLAPP motion against me, the court will send a chilling message to journalists and pundits across the country. Most Americans, and most reporters, live in states with anti-SLAPP statutes modeled on California's.

The threat to journalists is unmistakable: rock the boat and you risk being destroyed.

Write an article critical of a powerful institution like the LAPD, the nation's highly militarized, largest and most brutal police forces, controlling a $16 billion pension fund, and they can pull strings to get you fired. It can also happen in a tiny town like Baker City, Oregon.

Even worse, you can't find another job because they use falsified "evidence" to smear your reputation for honesty. Even if you can prove that it's BS as I did, media companies use their editorial endorsements of jurists and politicians to rig the courts with their allies so you, the victim, get dunned hundreds of thousands of dollars for the villainous media company's legal fees!

I have advice for journalists thinking about covering police abuse: don't. The price for doing your job -- termination, defamation and bankruptcy -- isn't worth it.

If I could go back to 2015 when the LAPD-owned LA Times trashed my reputation in service to a thin-skinned police chief, I would not draw or write anything about the cops. It's too dangerous.

I have learned how big media companies have stacked the bench with sympathetic judges, lobbied for laws that protect them from accountability for breaking the law and used their influence to crush individual journalists for such crimes as reporting the news or having worked long enough to earn a high salary. The system doesn't even pretend to be fair. Many judges are former prosecutors; how can they justify not recusing themselves from cases involving the cops?

Now there is a $330,000 judgment against me for having the gall to defend my reputation in court. Unless the California Supreme Court overrules it, that judgment will be final and will grow bigger. Journalists and pundits aren't covering my case; they're afraid, as they ought to be but they are watching. If the judgment stands, who will be stupid enough to take on the LAPD or similar institution?

As if the chilling effect on journalists wasn't enough reason to watch my case, the Times is arguing (so far, successfully) that media companies should no longer extend protections against discrimination by gender, age and sexual orientation to their workers. Unless the court overturns the lower court rulings against me, the door will be pushed open for the Times and other California media corporations to fire, say, its African-American or transgender employees without redress in the courts.

Then there's the damage to defamation law. For hundreds of years it has been possible for a person wrongfully slimed by a news publication to go to court to try to clear their name. Abusive anti-SLAPP motions have made a mockery of libel law to the point that the National Enquirer, represented by the same lawyer as the Times, falsely claimed Richard Simmons had become a transsexual woman and Simmons was ordered to pay $130,000 to the Enquirer!

Related Topic(s): Anti-slapp; Journalist Abuse; LAPD; Media; Police, Add Tags
Add to My Group(s)
Go To Commenting
The views expressed herein are the sole responsibility of the author and do not necessarily reflect those of this website or its editors.