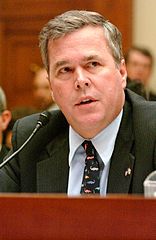 Poor Jeb Bush. He just can't get his mind straight on Iraq. Perhaps that's because he's reluctant to criticize his brother George W. Perhaps it's because he wants desperately to be president and is willing to take any position on Iraq that will garner him votes.

Whatever the reason is, when it comes to Iraq Bush just keeps digging himself a deeper hole, as reflected most recently by an attack regarding Iraq that he leveled yesterday against Hillary Clinton, accusing Clinton and President Obama of a "premature withdrawal" from Iraq, which, Bush says, enabled the rise of ISIS.

Recall how Bush's troubles on Iraq started. Several months ago, the press asked him whether he would have supported the Iraq War if he knew what he knows now. Bush responded, "I would have, and so would Hillary Clinton, just to remind everybody. And so would almost everybody that was confronted with the intelligence they got."

Soon after that, in response to attacks from the mainstream press, Bush changed his position. He acknowledged that if he had known the WMD intelligence on Iraq was false, he never would have supported the Iraq War.

Now he's suggesting that if he would have been president, he would have kept the troops occupying Iraq longer than Obama and Clinton did.

Let's go back to basics. It is an undisputed fact that Iraq never attacked the United States. Neither the Iraqi people nor the Iraqi government participated in the 9/11 attacks.

That doesn't seem to be a big issue with Jeb or with any other Republican candidate who now says that he wouldn't have supported the invasion of Iraq given what we now know because they never mention that. But it is a big issue because it means that the U.S. government was the aggressor in the Iraq War, just as Japan was the aggressor with its attack on Pearl Harbor. By attacking a nation that had never attacked the United States, the U.S. government was waging what the Nuremberg War Crimes Tribunal labeled the war crime of "waging a war on aggression." That's when one nation attacks, invades, and occupies another nation.

It doesn't matter how much one might love or support the troops. What matters is that by becoming the aggressors in the conflict, Bush's army had no moral or legal authority to kill, imprison, or torture even one single Iraqi.

By the same token, the Iraqi people and their government had the right under international law to defend themselves from Bush's war of aggression on their country.

There is another thing to consider: The U.S. Constitution. That's the law that we the people have imposed on federal officials. It requires the president to secure a congressional declaration of war before waging a war on another country. Bush failed to do that, which made his war illegal under our form of government.

The fact is that George W. Bush, conservatives, and neoconservatives wanted to remove Saddam from power and install a pro-U.S. stooge in his place. Ever since Jeb's and W.'s father, President George H.W. Bush, had waged his Persian Gulf War (also without a congressional declaration of war), conservatives and neo-conservatives were hopping mad that H.W. had not finished the war by effecting regime change in Iraq during the Persian Gulf War.

Thus, for the succeeding 10 years or more -- i.e., throughout the 1990s -- Saddam was the official bogeyman. Concern about the threat of communism or terrorism or Islam was virtually non-existent. It was all: "Saddam! Saddam! Saddam!" Conservatives and neocons were more obsessed with Saddam than they had been with Fidel Castro during the Cold War.

That's what the brutal sanctions on Iraq were all about -- the ones that contributed to the deaths of hundreds of thousands of Iraqi children. Their purpose was to instigate a coup or a revolution in Iraq whereby Saddam would be ousted or killed, must like the U.S.-instigated coup in Chile in 1973 that brought pro-U.S. military strongman Augusto Pinochet to power.

But the sanctions didn't work, just as the U.S. embargo against Cuba failed to effect regime change there.

Related Topic(s): Iraq Occupation Strategy; Iraq_War_Obscenity_Continues; Jeb Bush, Add Tags
Add to My Group(s)
Go To Commenting
The views expressed herein are the sole responsibility of the author and do not necessarily reflect those of this website or its editors.