Lori Shem-Tov, an Israeli blogger and anti-judicial corruption activist, is jailed prior to trial for over a year now. A recent judgment in her appeal in a separate case, redefines Freedom of Speech in Israel. The judgment made up a novel 'flexible formula' for distinguishing between protected speech and criminal activity. As applied, the "flexible formula" aimed at protecting corrupt government officers against exposure. Moreover, establishing a flexible, vague and ambiguous standard for determining criminality should be deemed a serious violation of Human Rights. This is the latest in a series of Israeli court rulings of recent years that undermine Freedom of Speech, Freedom of the Press, and the Right to Protest. 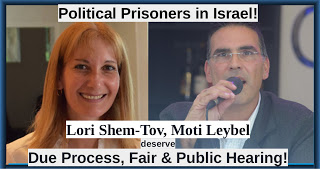 Figure. Bloggers Lori Shem-Tov and Moti Leybel, Israeli anti-judicial corruption activists, were jailed in late February 2017. Leybel was released to house arrest a couple of months ago, but Shem-Tov has remained in jail prior to trial to date.

Figure. The February 25, 2018 Tel-Aviv District Court Judgment in Lori Shem-Tov's appeal was published under the names of Judges Raanan Ben-Yosef, Shy Yaniv, and Zvi Gurfinkel. The Judgment redefines Freedom of Speech, Freedom of the Press, and the Right to Protest. Worse yet, the judgment record appears as a fake, sham court record, another case of Fraud upon the Court.

Tel-Aviv, March 10 - blogger Lori Shem-Tov is a central activist in the protest against corruption of the family courts and welfare system in Israel. Specifically - regarding taking children from poor families for adoption or surrogacy, a large-scale phenomenon in Israel. Lori has been jailed now for over a year in prior to trial - an unprecedented, if not unlawful act, perceived as retaliation by the judiciary. [1] The case is generally blacked out by media in Israel.

During her detention, Lori's appeal in a separate criminal case has been denied. In this case, Lori was convicted of violating the Protection of Privacy Act. The underlying issue was Lori's publication in 2014, that CEO of the Welfare Ministry, Yossi Silman, systematically failed to pay, or got away with not paying parking tickets in various cities. [2]

In her appeal, as in the trial court, Lori claimed that the publication was protected speech, part of her journalistic work.

'A matter of public interest', which justifies the violation of a person's privacy through publication, is a matter, knowledge of which provides the public some benefit, either by crystallizing opinions on public matters, or by bettering life... This is a relatively flexible formula. Its meaning should be determined, based on the objective perspective of the court... Such interpretation carries with it, in our opinion, a harsher approach to media...

The development by the judiciary of a vague "flexible formula", for their own discretion, to distinguish after the fact between protected speech on the one hand, and criminal conduct on the other hand, is nothing less than judicial chutzpah. As the judges themselves note, such "flexible formula" would have a chilling effect on media. Moreover, establishing a flexible, vague and ambiguous standard for determining criminality should be deemed a serious violation of Human Rights.

This judgment should also be considered part of a series of Israeli court rulings of recent years, which suppress Freedom of Speech, Freedom of the Press and the Right to Protest, and retaliate against whistle-blowers and protest activists - all in the context of the widening public protest against government corruption in Israel. [3]

His work won appreciation in Israel and abroad: * Prof Uzzi Ornan - "All power to you! I hope that you see your tremendous efforts (more...)
Related Topic(s): Freedom Of The Press, Add Tags
Add to My Group(s)
Go To Commenting
The views expressed herein are the sole responsibility of the author and do not necessarily reflect those of this website or its editors.