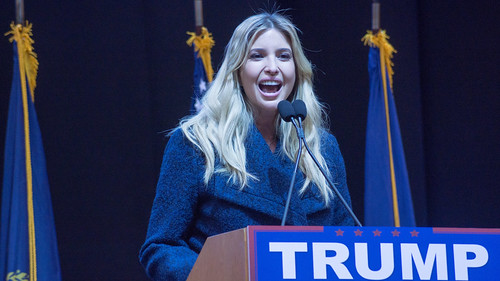 Far too much has been said about Ivanka Trump's conversion to modern Orthodox Judaism. The heiress has been lauded for following the 'letter' of Orthodox Judaism, particularly regarding her strict observance of the Jewish dietary laws for a kosher household and keeping the Sabbath or Shabbos holy. Now as we begin the High Holy Days of Awe; Jews worldwide are tasked with examining their conscience regarding actions on both earthly and spiritual levels.

Ivanka, you are a proud and politically convenient convert to Judaism; unfortunately your reverence to the daily rituals of our religion does not translate into the spirit of the faith. When you are able to remain silent during your father's bigoted tantrums--you are NOT observant in the spiritual sense. In fact, your silence on your father's questionable allies (such as various racist and neo Nazi groups); only grants questionable legitimacy to his many observed bigotries. You are not merely a silent partner in your father's racism, anti-Semitism, misogyny, homophobia etc.; you are a well-read enabler.

When we examine 'the Donald's incitement to riot against the alien 'other'--namely any group or person demanding equivalent civil rights; we find a gruesome litany of hatred, bigotry and irrational fears spewing from his mouth, filling the event venue with followers consuming this hatred much like a rabid dog attacks anything moving. During your father's rants, we see you enabling him with the calm reserved for a naughty toddler. Unfortunately Donald Trump is far more hateful and dangerous than anyone ever realized.

Your father seems to lack empathy for those he deems 'evil or unacceptable'. His many intolerant tantrums include mocking a New York Times reporter, Serge Kovaleski, who has Arthrogryposis which can cause joints to stiffen and freeze in one position. (Source : www.dailymail.co.uk/news/article-3335864/Donald-basis-Trump-s-claim-never-met-disabled-New-York-Times-reporter-contradicted-man-says-interacted-dozen-times.html ) In response to an uncomfortable challenge of his veracity your father displayed the cruelty and questionable maturity of a bratty 13 year old.

He based this claim on an article Kovaleski wrote some 15 years ago for the Washington Post. Kovaleski corrected Trump, explaining that he wrote reports observing" "a number of people"allegedly' celebrating in New Jersey, but that he never actually saw these revelers and that he has no idea where Trump got his figure from." (Source : www.dailymail.co.uk/news/article-3335864/Donald-basis-Trump-s-claim-never-met-disabled-New-York-Times-reporter-contradicted-man-says-interacted-dozen-times.html )

In a show of what can only be called 'revenge mocking'; your father performed a sick impression of Kovaleski, flailing his arms while using an odd affected voice during a campaign stop in Myrtle Beach.

On another instance, your father attacked Khizr and Ghazala Khan, the grieving parents of now deceased, US Army Captain, Humayun Khan. (Source : http://m.motherjones.com/politics/2016/07/donald-trump-just-smeared-dead-soldiers-family-khizr-khan )

During the most poignant speech of the Democratic National Convention, Khizr Khan stood on the podium with his wife Ghazala, as they honored their late son, Humayun who had given his life in Iraq, while denouncing Trump. Khan simply and eloquently said, "you have sacrificed nothing and no one." (Source : http://m.motherjones.com)

So did the pharaohs in Egypt, as they enslaved the people you now claim to have joined spiritually.

Ivanka, your father has many white supremacist fans, which include (but not limited to), the Daily Stormer--an avowed neo-Nazi 'news' site. (Source : http://m.huffpost.com) In fact, The Daily Stormer endorsed your father on June 28, stating that;

"Trump is willing to say what most Americans think: it's time to deport these people." The publication then urged white men to ""vote for the first time in our lives for the one man who actually represents our interests." (Source : http://m.huffpost.com

The Daily Stormer is an 'alt-right' publication which advocates genocide against non-Whites. Its editor, Andrew Anglin was quoted explaining that their""goal is to ethnically cleanse White nations of non-Whites and establish an authoritarian government. Many people also believe that the Jews should be exterminated." (Source : Hankes, Keegan (August 25,2016). "Whose Alt-Right Is It Anyways?" Southern Poverty Law Center. Retrieved October 1,2016.)

Jeanine Molloff is an online journalist who has published with Buzzflash, OpEdNews, Huffington Post, UK Progressive, Eurasia Review, Truthout and others. She produces the Sunday show on Progressive News Network, in addition to the Environmental (more...)

Related Topic(s): Auschwitz; Ethics; Evil; Genocide; Genocide; Holocaust; Holocaust; Injustice; Judaism Jewish; Kosher; (more...) Materialism; Politics, Add Tags  (less...)
Add to My Group(s)
Go To Commenting
The views expressed herein are the sole responsibility of the author and do not necessarily reflect those of this website or its editors.