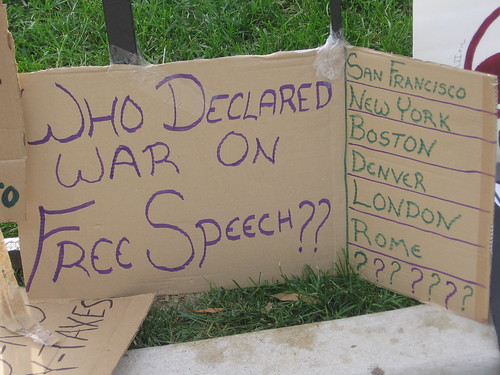 Who Declared War on Free Speech?
(Image by Caitlyn_and_Kara)   Details   DMCA
href="https://www.law.cornell.edu/supremecourt/text/407/104" rel="nofollow">Since when have we Americans been expected to bow submissively to authority and speak with awe and reverence to those who represent us? The constitutional theory is that we the people are the sovereigns, the state and federal officials only our agents. We who have the final word can speak softly or angrily. We can seek to challenge and annoy, as we need not stay docile and quiet." Justice William O. Douglas

These are all words that have at some time or other been used to describe the U.S. government.

These are all words that I have used at some time or other to describe the U.S. government. That I may feel morally compelled to call out the government for its wrongdoing does not make me any less of an American.

If I didn't love this country, it would be easy to remain silent. However, it is because I love my country, because I believe fervently that if we lose freedom here, there will be no place to escape to, I will not remain silent.

Nor should any other man, woman or childno matter who they are, where they come from, what they look like, or what they believe.

This is the beauty of the dream-made-reality that is America. As Chelsea Manning recognized, "We're citizens, not subjects. We have the right to criticize government without fear."

Indeed, the First Amendment does more than give us a right to criticize our country: it makes it a civic duty. Certainly, if there is one freedom among the many spelled out in the Bill of Rights that is especially patriotic, it is the right to criticize the government.

The right to speak out against government wrongdoing is the quintessential freedom.

Unfortunately, those who run the government don't take kindly to individuals who speak truth to power. In fact, the government has become increasingly intolerant of speech that challenges its power, reveals its corruption, exposes its lies, and encourages the citizenry to push back against the government's many injustices.

This is nothing new, nor is it unique to any particular presidential administration.

President Trump, who delights in exercising his right to speak (and tweet) freely about anything and everything that raises his ire, has shown himself to be far less tolerant of those with whom he disagrees, especially when they exercise their right to criticize the government.

In his first few years in office, Trump has declared the media to be "the enemy of the people," suggested that protesting should be illegal, and that NFL players who kneel in protest during the national anthem "shouldn't be in the country." More recently, Trump lashed out at four Democratic members of Congressall women of color who have been particularly critical of his policies, suggesting that they "go back and help fix the totally broken and crime infested places from which they came."

The uproar over Trump's "Americalove it or leave it" remarks have largely focused on its racist overtones, but that misses the point: it's un-American to be anti-free speech.

Related Topic(s): Anti-government; Censorship; First Amendment Speech; Rights; Un-american, Add Tags
Add to My Group(s)
Go To Commenting
The views expressed herein are the sole responsibility of the author and do not necessarily reflect those of this website or its editors.