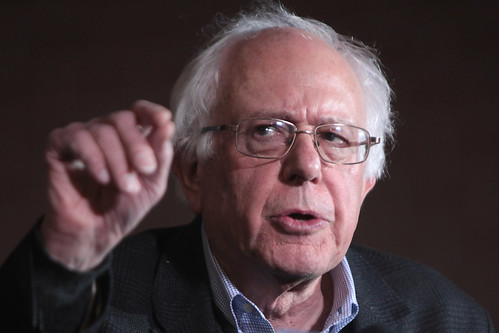 This morning I heard from an old friend here in California who said "I'm for Bernie, but he doesn't really have a chance anymore. So isn't my vote for him in the California primary just prolonging the agony, and indirectly helping Trump?"

1. True, the electoral numbers are daunting, and Bernie faces an uphill task, but a win Tuesday will help enormously. One out of eight Americans lives in California.

2. Regardless of the electoral math, Bernie's candidacy has never been mainly about Bernie. It's been about a movement to reclaim our democracy and economy from the moneyed interests. And a win for Bernie in the California primary (and in other Tuesday primaries in Montana, New Jersey, North Dakota South Dakota, and New Mexico) will send an even clearer signal to Washington, the Democratic Party, and the establishment as a whole, that a large and growing share of Americans is determined to wrest back control.

3. The goals Bernie has enunciated in his campaign are essential to our future: getting big money out of politics and reversing widening inequality; moving toward a single-payer healthcare system and free tuition at public universities (both financed by higher taxes on the richest Americans and on Wall Street); a $15 minimum wage; decriminalization of marijuana and an end to mass incarceration; a new voting rights act; immigration reform; and a carbon tax. All will require continued mobilization at all levels of government. A win Tuesday will help continue and build on that mobilization.

4. Bernie's successes don't help Trump. To the contrary, they are bringing into politics millions of young voters whose values are opposite to those of Trump's. Bernie has received majorities from voters under age 45 (as well as from independents). He's won even larger majorities of young people under 30 -- including young women and Latinos. Many have been inspired and motivated by Bernie to become political activists -- the last thing Trump and the Republicans want.

Watch my conversation with Bernie...

Related Topic(s): Bernie Sanders; Democracy; Voting, Add Tags
Add to My Group(s)
Go To Commenting
The views expressed herein are the sole responsibility of the author and do not necessarily reflect those of this website or its editors.