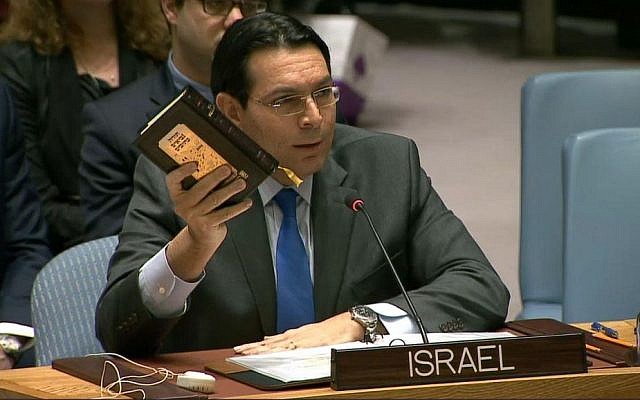 Israel's Ambassador to the UN, Danny Danon, waved a Hebrew Bible/Old Testament when he gave a speech at the UN on December 23, 2016. His speech was condemning a UN Security Council resolution that denounced Israel's brutal, illegal and expanding occupation of Palestinian land in the Palestinian West Bank and Palestinian East Jerusalem. Danon said,

We will overcome this evil decree. We have full confidence in the justice of our cause... We will continue to be a Jewish state proudly reclaiming the land of our forefathers... where King David ruled from Jerusalem.

More recently, Danon said in an interview with the BBC, when asked about Israel violating international law by its growing occupation of Palestinian land and its planned annexation/land theft of 30% of the remaining Palestinian West Bank,

I will get to the international law in a minute. We do have biblical rights to the land. Whether you are Christian, Muslim, or Jew - you read the Bible, you read the stories of the Bible - it's all there. This is our deed to the land. That's biblical.

Danon and the Jewish state of Israel are not alone in this false belief that God gave the Jews a gift of real estate in the Middle East. The sycophants who make up the vast majority of US politicians from both major political parties also parrot this line of nonsense from Israel and its overly powerful lobby. Many state legislatures in the US have passed resolutions claiming the Bible is the land deed for the Jewish state of Israel. One example is from the House of Representatives of South Carolina which introduced and adopted a resolution on June 2, 2011 which states,

Whereas, Israel has been granted her lands under and through the oldest recorded deed as reported in the Old Testament, a tome of scripture held sacred and reverenced by Jew and Christian, alike, as the acts and words of God; and

Whereas, as the Grantor of said lands, God stated to the Jewish people in the Old Testament; in Leviticus, Chapter 20, Verse 24: "Ye shall inherit their land, and I will give it unto you to possess it, a land that floweth with milk and honey";

The legislators omitted the last sentence of the verse which claims God also said to Moses regarding the Jewish people, "I am the LORD your God, which have separated you from other people." This belief that God separated the Jews from other people, coupled with Deuteronomy 7:6, in which God allegedly, according to the ancient Jewish clergymen who wrote the Bible, said that God chose the Jews "above all people that are upon the face of the Earth" gives religious Jews a false sense of superiority to Gentile people.

In addition to opportunistic politicians supporting the myth in the Bible that God gave real estate to the ancient Jews so they could have their Jewish state of Israel, there are literally millions of Zionist Christians who believe the myth as fact, too. Christian clergyman/con-man John Hagee, who is the founder and leader of Christians United For Israel (CUFI) has posted to his site a list of seven biblical reasons Christians need to support Jews and Israel. In true "revealed" religion fashion, the first reason is based on the fear and selfishness of the believer. It is,

Genesis 12:3 "And I will bless them that bless thee and curse him that curseth thee; and in thee shall all nations of the earth be blessed." Point: God has promised to bless the man or nation that blesses the Chosen People. History has proven beyond reasonable doubt that the nations that have blessed the Jewish people have had the blessing of God; the nations that have cursed the Jewish people have experienced the curse of God.

In other words, if a Gentile does not bless/support the self-proclaimed "Chosen People" and the Jewish state of Israel, God will curse them. This is the same mindset that Christianity itself is based on: become a Christian and spend eternity in heaven, or don't become a Christian and burn in hell for eternity. In both cases altruism is completely absent. It's also interesting to note that Albert Einstein, who was a non-religious Jew, said he's been around Jews throughout his life, and there is nothing "chosen" about them.

Israel, Danon, Hagee and the opportunistic US politicians want to take the world back to the days of King David and a Greater Israel. The Gentile people, the Zionist Christians in particular, should be aware of what that would mean for them and theirs. They can make themselves aware by objectively reading their own Bible, especially the Old Testament/Hebrew Bible part of it. They will see that Gentile people and nations are to serve Israel. And if they don't serve the Jewish state, God will destroy them (Isaiah 60:12).

Zionist Christians who give their blind support to Israel and who want everyone else to do the same, need to be alright with their children and all of their offspring and themselves being slaves of Jews. This is very evident in the Hebrew Bible/Old Testament at Leviticus 25:44-46 (the same book of the Bible the South Carolina resolution mentions) which claims God said to the Jews,

Both thy bondmen, and thy bondmaids, which thou shalt have, shall be of the heathen that are round about you; of them shall ye buy bondmen and bondmaids. Moreover of the children of the strangers that do sojourn among you, of them shall ye buy, and of their families that are with you, which they begat in your land: and they shall be your possession. And ye shall take them as an inheritance for your children after you, to inherit them for a possession; they shall be your bondmen for ever: but over your brethren the children of Israel, ye shall not rule one over another with rigour.

Bob Johnson is a paralegal and a freelance writer in Florida. He was raised Roman Catholic, but after reading Thomas Paine's The Age of Reason, he became a Deist. In 1993 he founded the World Union of Deists and in 1996 he launched the first web (more...)
Related Topic(s): Israel; Israel And Palestine; Israel Attack On Uss Liberty; Israel Firsters; Israel Lobby; Israel Runs Washington; Israeli Fascism; Israeli Intransigence; Israeli Pressure On US; Israeli Settlements; (more...) Israeli_Propaganda; Peace, Add Tags  (less...)
Add to My Group(s)
Go To Commenting
The views expressed herein are the sole responsibility of the author and do not necessarily reflect those of this website or its editors.