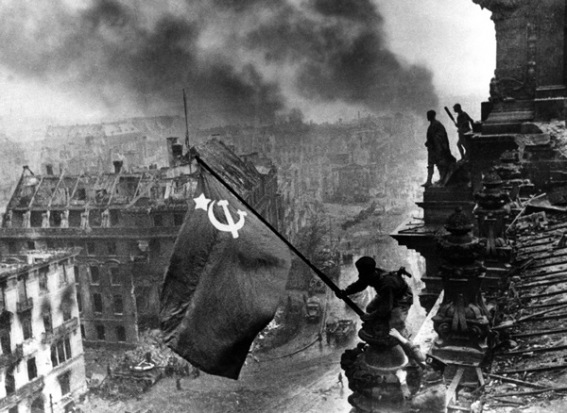 Liberating Berlin photo by (Jewish) Soviet Yevgeny Khaldei
(Image by (Not Known) Wikimedia commons, Author: Author Not Given)   Details   Source   DMCA
Is Israel US property? In many ways, yes. Despite its willful ways, Israel is always pushing the envelope with the US. It has been getting away with murder since it was founded, abetted and funded by the US. But the US has failed, and Jared Kushner is the perfect envoy for this latest ultimatum, crafted by Netanyahu for his buddy Donald and his Orthodox Jewish son-in-law.

*immediately annexes territories in the West Bank, newly built and under construction, the first stage in the annexation of the Jordan Valley and all the settlements.

*proposes a tunnel from Gaza to the West Bank.

*cuts off 'Palestine' from Jordan.


But Israel is actually beholden to the Soviet Union for its survival in 1948, before its founders turned right and joined the US-led Cold War. Putin is very friendly with Israeli leaders. 20% of Israelis are Russian-speaking immigrants. The founders of Israel, Ben Gurion and Begin, were communists. Ben Gurion wrote an ode to Lenin , and Begin was an NKVD agent. Russian is almost a lingua franca in Israel.


Russia's intervention in Syria, though problematic and far from peaceful, is considered a success in defeating ISIS, in alliance with Iran. This is actually a revival of Soviet foreign policy, as Syria was an ally of the Soviet Union and modeled itself on the 'real existing socialism' of the 1960s--70s. Israel abandoned its socialist roots long ago, and Russia is both feared and respected by Israelis. Putin is no one's puppet.


The battle for Syria is not over and is not in Israel's imperial, hegemonic interests. Russia is an ally of Iran there, in opposition to Israel. Both Russia and Israel have lost planes due to Israel's meddling. Israel acts with relative impunity against Iranian troops. Russian-Israeli relations are complicated.


Russia is playing a mediating, balancing role, as opposed to the US, Israel and Turkey, all pursuing their own warlike agendas. It looks now as if the Assad regime will survive and Syria will be able to rebuild (China is ready and willing), despite Turkey, Israel and the US. The next step is bringing some semblance of peace to Palestine. Why not a Putin- Netanyahu- Abbas 'deal of the century', though it won't be written by Netanyahu or Gantz, and it will lack Trump's preening ego.


A Russian solution would be based on UN Security Council resolutions and the 2002 Arab Peace Initiative, and should/ would include

*an end of settlements and negotiations over what to do with existing settlements.

*some form of federation allowing for

*Jerusalem as a shared city of peace


This will require disarming settlers and removing them if necessary, or at least a trade in lands. It will probably be a one-state solution, feasible when Israel has been confronted with its sins, and is finally accepted as part of the geopolitical region on terms of equality, not terror and war.


Whether or not it is called Jewish is a moot point, as long as all citizens are treated equally. Birobaidjan is a Jewish Autonomous Region in the Russian Federation, though only 4% of citizens there are Jewish. Whether Israel-Palestine is 40% or 60% Jewish is not a problem. Muslim states have always been tolerant, believing there is 'no force in religion'.


Putin is in a unique historical moment. A strong, respected leader, very sympathetic to the plight of Jews in WWII, and respectful of Israel as a powerful, disciplined state (just as Stalin respected Hitler's powerful German state in the 1930s). But more important, he also has the Soviet legacy of support for third world revolution against imperialism, the same spirit that inspires Palestinians and their supporters today.


Reading Ramzy Baroud's These Chains Will Be Broken: Palestinian stories of struggle and defiance in Israeli prisons (2019) is like reading a rousing account of Russian communist partisans in WWII or revolutionaries in Tsarist Russian before 1917.


The passion in Dareen Tatour's Resist, my people, resist them, that Israel considered so dangerous that she was imprisoned for 3 months then placed under house arrest in Tel Aviv, away from her family for 2 years 8 months. Then hounded by the Nazareth district court for another 5 months behind bars. She was told if she wrote any more political poetry, she would be immediately given even more prison time.

In Jerusalem, I dressed my wounds and breathed my sorrows

And carried the soul in my palm

Of an Arab Palestine.

I will not succumb to the 'peaceful solution'


Russians are unapologetic romantics, proud of their leading role in defeating fascism. Alexey Maresyev, a military pilot who became a Soviet fighter ace during World War II despite becoming a double amputee, was portrayed in Boris Polevoy's bestselling novel, The Story of a Real Man, and inspired Sergei Prokofiev's last opera. Such heroes remind Russians today of their heroic, tragic past, their responsibility before history. His valour and devotion to the liberation of then-occupied Russia is like a page out of Baroud's touching testimonials.


The Palestinians see Russia as an ally of sorts, supportive of Hamas, criticizing Israel for its settlements and persecution. Meanwhile, Israel eagerly courts Russia, as was seen at the Auschwitz commemoration in Jerusalem in January, where Russian foreign minister Lavrov wept, and Putin's address was given the highest respect.

Russia was acknowledged there as the real liberator of Jews in WWII, unlike commemorations in the West that play up the US and Britain as the liberators of Europe, scandalously rewriting history to their liking. Netanyahu is smart, pressing the right buttons, not fearing to slight Poland, which has never owned up to the murder of Jews by Poles under the approving eye of the German occupiers. Ask many Poles who liberated them, and you will see steam coming out their ears.


A firm hand in wrestling a deal with Israel is possible. Putin has respect from both sides, does not have the baggage of condoning and financing settlements, and is not so beholden to an Israel lobby, such as it exists in Russia (though Russian media is uniformly pro-Israel).


Of course, with Trump in office, no Russian proposal will fly. The Middle East Quartet (UN, US, EU, Russia, founded 2002), intended to mediate the Israeli-Palestinian peace process, could be resuscitated under anyone-but-Trump. Just as serious Russian involvement in Syria brought about the defeat of ISIS and stabilization of the state of Syria, Russia spearheading a realistic plan, willing to face down the handful of settler fanatics, could reset the stage for progress.

Someday, the walls of every prison may come tumbling down, ushering in the age of Palestinian freedom.

A small step for man, a giant leap for mankind. The last racist, apartheid state kaput. The was the dream from Soviet days and stands today as the goal of all humanity, with Russia the key player.

Related Topic(s): Apartheid; Auschwitz; Hamas; Heroes; History; Iran; Israel; Jerusalem; Palestinian; Peace; (more...) Russia Today; Syria; Vladimir Putin, Add Tags  (less...)
Add to My Group(s)
Go To Commenting
The views expressed herein are the sole responsibility of the author and do not necessarily reflect those of this website or its editors.