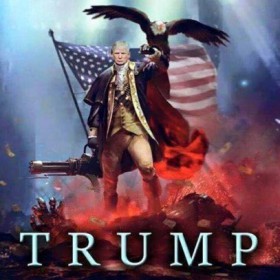 No revolution with Trump - News
(Image by morningmail.org)   Details   DMCA

The news is full of mis and disinformation regarding the inauguration of D. J. Trump. Misinformation is false or inaccurate information, especially that which is deliberately intended to deceive. Disinformation is intentionally false or misleading information that is spread in a calculated way to deceive target audiences, news that is true but is meant to deceive you. They both can be considered Fake News.

For example, about 1,000 of a promised 4,000 U.S. troops did arrive in Poland at the start of the week. As the troops, tanks and heavy armored vehicles crossed into south-western Poland from Germany getting close to the Russian border, some people, known as conspiracy theorists, are behind the disinformation that Obama is planning to kick off World War III on Friday so he can declare Martial Law and stay President.

Soros-backed groups, behind the "Not My President," are funding anti-Trumpsters all over the country on Friday to protest Trump becoming the 45th POTUS. Although a large faction of demonstrators are self-motivated, there is no way a movement this organized could happen without outside, professional help.

What protests are taking place during Donald Trump's inauguration... Telegraph.co.uk-Jan 17, 2017

Boycotting the inauguration may be the right protest, but it's the ... Opinion-Los Angeles Times-16 hours ago

Everything you need to know about Donald Trump's inauguration Blog-Politico (blog)-Jan 17, 2017

And finally, the top commander, in charge of the 5,000 troops from out of state that have been sent in to augment security for the inauguration, is being removed at 12:01 p.m. on inauguration day.

Maj. Gen. Errol Schwartz, the commander of the District of Columbia National Guard, is going to be out of a job just as President-elect Donald Trump takes the oath of office. Schwartz confirmed that he would be leaving at that time but that he did not know the reason for his dismissal.

Well, according to one of the top fake news websites, the "Deep State" is planning to assassinate Trump.

According to Sorcha Faal, and as reported to her Western Subscribers, there is an apocalyptic sounding Security Council (SC) report circulating in the Kremlin today that says President Putin has just received an emergency personal message from President-elect Donald Trump that, in part, says "I may not live through week," but adds, "If I do, I'll get even with these bastards and everyone will win!" Trump allegedly goes on with two cryptic quotes:

1.) "We shall have world government, whether or not we like it. The question is only whether world government will be achieved by consent or by conquest."--that was stated by the German born American banker James Warburg, son of Council on Foreign Relations (CFR) founder Paul Warburg, who said these shocking words when he gave testimony before the US Senate Foreign Relations Committee on 17 February 1950.

2.) "Today the path to total dictatorship in the U.S. can be laid by strictly legal means" We have a well-organized political-action group in this country, determined to destroy our Constitution and establish a one-party state" It operates secretly, silently, continuously to transform our Government" This ruthless power-seeking elite is a disease of our century" This group"is answerable neither to the President, the Congress, nor the courts. It is practically irremovable."--that was stated by US Senator William Jenner four years later in 1954.

Related Topic(s): Donald Trump Lies; GrassRoots; Grassroots Astroturfing; Trump Non-stop; Trump Presidency; Trump Protesters; Trump Russia Memos, Add Tags
Add to My Group(s)
Go To Commenting
The views expressed herein are the sole responsibility of the author and do not necessarily reflect those of this website or its editors.