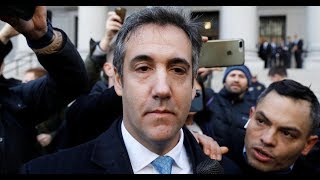 In the Trumputin world of organized crime, Michael Cohen has committed the ultimate betrayal: he's helped Robert Mueller prove beyond doubt that don Putin in the Kremlin put his very own bagman into the White House.

Cohen is the ultimate mobster nightmare, the inside attorney who flips. Many a consigliere has died at Mafia hands for far less.

For what might come next, see Jamal Khashoggi, the Washington Post reporter literally butchered by the Saudi branch of the Trumputin oligarchy.

Nixon's lawyer, John Dean, called Watergate a "cancer on the presidency." Cohen has confirmed that the "conspiracy theories" about Trump colluding with Putin are an epic understatement.

Mueller's "report" has thus far been seeping out in the indictments against Trump's enablers, a list that may ultimately include Trump's children, Vice President Mike Pence, former attorney general Jeff Sessions, and many more, including The Donald himself.

Still missing is the vital context: Trump's decades of money laundering for the Putin oligarchy.

Watergate did not come in a vacuum. Nixon had already committed treason by sabotaging 1968 Vietnam peace talks. He also illegally bombed Cambodia, feeding the slaughter of at least 3 million people.

In 1972, at Sundance Magazine, I edited a massive expose' by Jeff Gerth detailing Nixon's lifelong ties to the criminal underworld, much of it centered in Florida.

None of that played a major overt role in Dick's fall.

But Trump's decades of money laundering are no secret. As documented by David Cay Johnston, Craig Unger, and many more, Trump used some 1,300 shady real estate deals with Russian oligarchs to flip a multi-billion-dollar debt and at least four bankruptcies into a cash-rich buying spree. His flagship Trump Tower on Manhattan's Fifth Avenue is a porous membrane for ruble-to-dollar osmosis.

All that set the stage for 2016. Because he didn't plan on winning, Trump ran the campaign as just another self-promoting reality show. The Trump Tower he wanted to build in Moscow, with its $50-million Putin penthouse, was to be his flashiest combination showpiece and laundromat.

Putin is vastly more intelligent and capable than Trump, and had a far better grasp on the power of such double-dealings. His oligarchs would be immune from future prosecutions, as Mueller's futile indictments of so many Kremlin trolls has shown. But their puny White House bagman, an American Boris Yeltsin, would deliver immense fiscal opportunities and stunning geopolitical gains (at least in the short term).

Trump had no clue. True to his authoritarian DNA, he's fled immediately to fascism, assaulting every aspect of democracy with the blood rage of a cornered rat.

His goose-stepping GOP has followed suit. Fascist coups in Wisconsin, Michigan, and North Carolina are well underway. The governorship of Georgia has been stolen. The gerrymandered Ohio legislature is banning abortion. And that's just for openers.

Related Topic(s): Crime; Donald Trump Ego; Donald Trump Lies; Indictments; Michael Cohen; Treason; Vladimir Putin, Add Tags
Add to My Group(s)
Go To Commenting
The views expressed herein are the sole responsibility of the author and do not necessarily reflect those of this website or its editors.