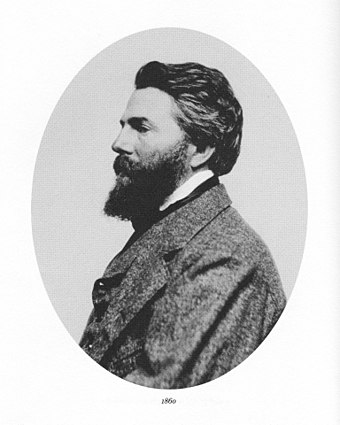 Duluth, Minnesota (OpEdNews) July 8, 2020: Herman Melville (1819-1891), whose paternal and maternal grandfathers were heroes of the American Revolution, heroically devoted years of his life in obscurity as a minor customs official in Manhattan to writing his long centennial poem Clarel: A Poem and Pilgrimage in the Holy Land (1876) - an American Protestant jeremiad in the well-established tradition that Sacvan Bercovitch describes in his book The American Jeremiad (University of Wisconsin Press, 1978; 2nd ed., 2012), in which he discusses Melville from time to time (see the index entry for Melville for specific page references).

However, without ever adverting explicitly to the American Protestant jeremiad tradition in general, or to Bercovitch's book in particular, William Potter (born in 1955; Ph.D. in English and American Literature, City University of New York, 1998) otherwise extensively reviews pertinent related literature in his 2004 book Melville's Clarel and the Intersympathy of Creeds (Kent State University Press). As Potter explains on page xiii, the expression "the intersympathy of creeds" is taken from Melville's poem Clarel (Part 1, Canto 5, Line 207 - or, for short, 1.5.207).

An overview of Potter's book is in order. After the title page and the copyright page, the book includes the following parts:

Dramatis Personae [Names of Nine Characters, with Lines from the Poem Describing Each One] (page v)

Related Topic(s): Belief; Beliefs; Buddhism; Christianity; Culture; Faith; God; Hinduism; History; Islam; (more...) Jewish; Mysticism; Poems; Protestant; Spirit; Spiritual; Theologians, Add Tags  (less...)
Add to My Group(s)
Go To Commenting
The views expressed herein are the sole responsibility of the author and do not necessarily reflect those of this website or its editors.