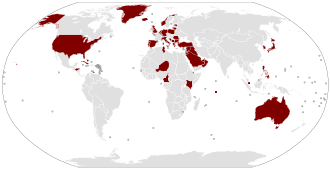 US Secretary of State Mike Pompeo describes the Trump administration's plan for peace between Israel and Palestinian Arabs as "unexecutable." President Trump says Pompeo "may be right."

Good! As addiction counselors say, the first step is admitting you have a problem. With addiction, the way out is not "if at first you don't succeed, try, try again." It's admitting that the thing you're addicted to will never solve your problems and giving up that thing.

The United States suffers from a long-term addiction, since at least the end of World War 2, to trying to run the world.

That addiction has cost American taxpayers trillions of dollars.

It's cost the lives of hundreds of thousands of Americans and millions of citizens of other countries.

It's empowered evil regimes to suppress human rights both at home and abroad.

And it has never, ever "worked" in the sense of bringing about lasting peace, any more than booze saves marriages or methamphetamine repairs mental anguish.

In fact, just like booze or methamphetamine, the US addiction to world "leadership" wrecks the lives of everyone around the addict too. Which means that if the US gets its act together, everyone else, not just Americans, will be better off.

Here's a four-step peace plan that addresses the roots of the problem instead of just unsuccessfully trying to treat the symptoms:

First, the US should shut down its military bases on foreign soil and withdraw its troops from the foreign countries they're currently operating in.

Second, the US should end economic sanctions on, and extend full diplomatic recognition and trade privileges to, all the countries it's currently bullying.

Third, the US should end all foreign aid, especially military aid.

Fourth and finally, the US should dramatically decrease its so-called "defense" budget to levels consistent with actual defense.

Cold turkey withdrawal may be out of the question, but the US can and should wean itself off the damaging drug of foreign interventionism.

Let the Arabs and Israelis settle their own hash. Quit taking sides between Saudi Arabia and Iran. Stop pretending North Korea is or ever has been a threat to the United States. Step back and let Venezuelans, Syrians, and Libyans decide who's going to run Venezuela, Syria, and Libya.

It won't be easy, but it's not complicated either. The US can continue drinking itself to death on the poison of foreign meddling, or not. Not is better.

Related Topic(s): Middle_East_Conflict; Peace; Us Foreign Policy, Add Tags
Add to My Group(s)
Go To Commenting
The views expressed herein are the sole responsibility of the author and do not necessarily reflect those of this website or its editors.