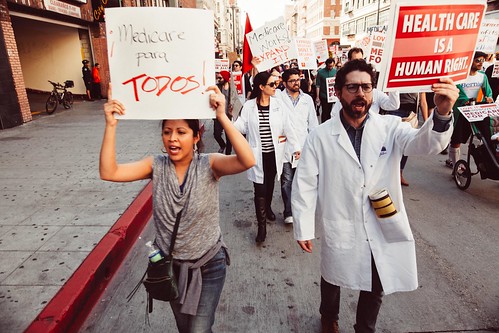 These is no shortage of people who claim the United States is the best place to do just about everything.

From growing up, going to school, working, vacationing, to retiring, there is no better locale under the sun than the good old U-S-of-A.

After all, we are the country that practically invented freedom.

Is there anything we can't do in the United States?

How about raising a family?

More than 66,000 Americans last year opted to have children abroad, in part due to skyrocketing healthcare and subsequent childcare costs.

Of any nation, Americans pay the most for childcare.

Two years ago, the Organization for Economic Cooperation and Development (OECD) reported American couples spend 25.6% of their income on childcare costs; single parents, 52.7%.

When it comes to public health, the most obvious inequity lies in the reality that we spend the most money on healthcare--20% of our national income--of any OECD country on the planet, yet we are not the healthiest country.

Most countries offer healthcare as a human right to all its citizens.

But of the 25 wealthiest nations, the United States is the only one that fails to do this.

Even with employer-provided insurance, most Americans pay on average $4,569 in out-of-pocket childbirth fees.

America is also the only wealthy nation without mandatory paid maternity leave.

Related Topic(s): Childcare; Children; Economic; Families; Family; Health; Health; Healthcare; Inequality; Women, Add Tags
Add to My Group(s)
Go To Commenting
The views expressed herein are the sole responsibility of the author and do not necessarily reflect those of this website or its editors.