After Watergate, we worked for impartiality. Trump, Roger Stone and William Barr have dragged us back to the swamp 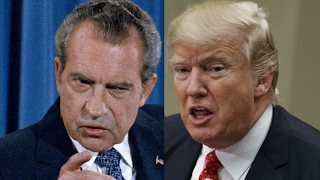 "History doesn't repeat itself, but it sometimes rhymes," Mark Twain is supposed to have said.

My first job after law school was as an attorney at the Department of Justice (DoJ). I reported for work September 1974, weeks after Richard Nixon resigned.

In the years leading up to his resignation, Nixon turned the justice department and FBI into his personal fiefdom, enlisting his appointees to reward his friends and penalize his enemies. He brought conspiracy charges against critics of the Vietnam war, for example, and ordered the department to drop an antitrust case against ITT after the conglomerate donated money for the 1972 Republican convention.

During the Senate Watergate investigation, Nixon's stooges kept him informed. Reports about how compromised the justice department had become generated enough public outrage to force the appointment of the first Watergate special prosecutor, Archibald Cox.

Before Nixon's mayhem was over, his first two attorneys general were deep in legal trouble John Mitchell eventually served 19 months in prison and his third resigned rather than carry out the demand to fire Cox.

Watergate also ushered into politics a young man named Roger Stone who, as it happens, also graduated from my small rural high school in Lewisboro, New York, although I didn't know him. Stone's first job was on Nixon's 1972 campaign, working for the Committee to Re-elect the President, known then, and forevermore, as Creep. Stone joined some two dozen dirty tricksters hired to lie about, harass and dig up dirt on Democrats.

After Nixon resigned, the entire slimy mess of Watergate spawned a series of reforms designed to insulate the administration of justice from politics.

During the years I worked at the justice department, officials teamed up with a bipartisan group of congressional leaders with the goal of making justice the most independent part of the executive branch.

"Our law is not an instrument of partisan purpose," said Edward Levi, Gerald Ford's attorney general.

Griffin Bell, appointed by Jimmy Carter, described the department as "a neutral zone in the government, because the law has to be neutral."

Regulations were put into place to insulate the FBI and DoJ from political interference. The FBI director was given a 10-year term. A protocol allowed for the appointment of outside prosecutors. US attorneys were to be independent.

Now we're back to where we were 50 years ago. Trump seems determined to finish Nixon's agenda of rigging elections and making the justice department a cesspool of partisanship. In Trump's 2016 campaign, even Stone was back to his old dirty tricks of issuing lies and conspiracy theories, and seeking dirt on a Democratic opponent.

Related Topic(s): Justice Denied; Trump; Trump Against Democracy; Trump Bigotry; Trump Nixon Similarities, Add Tags
Add to My Group(s)
Go To Commenting
The views expressed herein are the sole responsibility of the author and do not necessarily reflect those of this website or its editors.