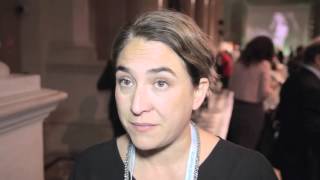 Losing Barcelona. That was the headline on the story in Jacobin this week. A local vote in a far-off city; had I not just returned from Barcelona, I might have left it at that.

The truth is, US media give us so little coverage of goings-on elsewhere, and so little context as to why Americans should care, there's little incentive to keep up; but Barcelona's different. For close to a decade now, it's been what my friend Sol Trumbo Vila calls a beacon for the possibilities of transformative change at the city level.

Led by former housing activist Ada Colau, who was elected Mayor in May 2015, Barcelona's government has been in the hands of a movement that had become a political party -- Barcelona en Comú. They won office on a pledge to "develop the city as a commons," meaning a place for people, not a profit center for speculators and extractive corporations. In office, Colau halted new hotels, stopped thousands of foreclosures, supported worker owned cooperatives, and formed the state's largest publicly-owned utility. They also encouraged a free, neutral, cooperatively owned broadband network called Guifi.net that offers low price WiFi and a prize-winning alternative to the telecom giants.

Colau established new systems of governance with more local consultation. Did she solve all the problems of an austerity-hit city hemmed in by bans on borrowing, hiring and expanding the public budget? No. Did she figure out ways to work with others without disappointing their base? Not always. Most damaging was their fence-sitting on the Catalan independence question. Having seen the footage of heavily armed federal police literally batoning people as they clung to their forbidden ballot boxes, I get it why separatist Ernest Maragall may have scored 4,800 more votes than Colau in this May's vote.

But Losing Barcelona? Maragall and Colau actually stood neck and neck in council seats when the Jacobin article appeared. They were both left of center parties. Colau could have teamed up with him to stay in government but lose the Mayor's post, or she could have partnered with more left-of-center winners -- Pedro Sanchez's socialist party (PP), which came in second after a high profile surge in national elections earlier in the month. In the end, Colau was re-elected mayor by the city council with the support of the Socialists and the backing of former French prime minister, Manuel Valls.

So, Losing Barcelona? Even if Colau had lost the election, the commons agenda is seeded deep into the city. In an interview, even crusty Maragall endorsed support for cooperatives and digital democracy and the Fearless Cities network that Colau and others helped to start.

And at the level of principle, Colau has not finished making change yet. Having polled her base last weekend, Colau put the question to the people. Barcelonans had the chance to vote on what deal she should make. Let the people decide. Putting that principle into practice has got to be a win, no matter what.

Related Topic(s): Ada Colau; Barcelona; Bottom-up; Bottom-up Top Down; Democracy; Election; Mayor, Add Tags
Add to My Group(s)
Go To Commenting
The views expressed herein are the sole responsibility of the author and do not necessarily reflect those of this website or its editors.