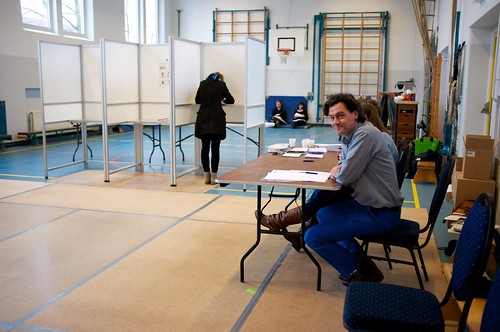 voting booth
(Image by Sebastiaan ter Burg)   Details   DMCA
ref="https://www.usatoday.com/story/opinion/2018/11/16/ranked-choice-voting-maine-protest-candidates-election-2018-column/2023574002/">In the end, the ultimate winner has the support of at least half of voters"- -"- not a terribly radical idea in a democracy." - Lawrence Lessig

In Los Angeles, the allegedly cash-strapped school district will spend approximately $2.4 million in the special elections to replace disgraced former Board member Ref Rodriguez. This is money that won't be available to reduce class sizes, give students with special education needs the services they need or ensure that every school is staffed with a trained librarian. Even worse, it will be used in an electoral system where the vast majority of those eligible to participate will not do so and little will be done to promote the exchange of ideas between candidates.

In the primary round of this election, Jackie Goldberg won handily with 15,241 votes, representing 48.45% of the ballots cast. This was 11,097 votes more than her closest competitor who was only chosen by 13.17% of those who voted. However, since Goldberg did not win more than 50% of the vote, a runoff election will be held on May 14. There is little reason to believe that turnout will be any more than the 9% that voted in the primary.

If Los Angeles used a Ranked Choice method of voting like Berkeley, Oakland and San Leandro, the Los Angeles Unified School District (LAUSD) would not be preparing to spend more money on another election but, instead, the residents of Board District 5 would already know who is going to represent them. More importantly, the majority of the voters would have had a say in choosing Rodriguez' successor.

Ranked Choice Voting!?! Here's How it Works San Francisco's new mayor will be chosen next month by a system few voters can fully explain, much less understand, and a process that even the guy who runs ...
(Image by YouTube, Channel: KQED News)   Details   DMCA
Under Ranked Choice, each voter selects up to three candidates on the ballot and notes their order of preference. When the votes are first counted, only the first choice is noted. If no candidate wins more than 50% of the vote, then the lowest vote-getter is eliminated. For the next round of tabulation, anyone who voted for the eliminated candidate has their second choice counted. This process is repeated until one candidate wins a majority of the votes.

A good example of this process can be found in the race for Maine's Second Congressional seat, the first federal election where Ranked Choice had a role in selecting a member of Congress. On election day, 131,631 people (46.41% of those voting) chose the Republican, 128,999 voted for the Democrat and 23,013 chose one of the independent candidates. Since no candidate won more than half of the vote, those voting for the independents had their next choices tabulated. As a result, the Republican gained 4,695 votes, the Democrat added 10,232 votes while "roughly 8,000 of the ballots cast for the independents did not designate an additional choice or did not select either of the major-party candidates." As a result, the Democrat won with 50.53% of the vote.

One advantage of this system is that it allows candidates to run without fearing that they would play the role of a spoiler. It would also allow voters a broader voice at the polls. In the 2016 presidential election, Berniecrats could have logged a protest vote against a rigged primary by using their first and second choice votes for third-party candidates who were more closely aligned with their views without having to worry that this choice would help to elect Trump since it would still have helped to keep him under the 50% + 1 threshold. Putting Clinton as a third choice would have sent a clear signal that the voter was truly holding their nose as they placed the vote.

By allowing more candidates to run, Ranked Choice Voting also expands elections so that more ideas can be offered. In the Los Angeles election, there were potential pro-public education candidates who backed out of the race with the fear that their presence would have helped clear the way for a candidate supported by the charter school industry. Even candidates like Rocio Rivas, who stayed in the race, purposefully steered clear of interfering with Goldberg so as not to play the role of spoiler. Under a Ranked Choice system, Rivas could have continued to advocate for her unique positions as an education researcher and District parent. Instead of asking her supporters to vote for Goldberg, she could have asked them to support her platform and select Goldberg as their second choice. If most of her supporters did so, this would have been enough to push Goldberg over the 50% threshold while still expressing explicit support for Rocio's ideas.

(Image by SEIU 99)   Details   DMCA
As noted by open-elections expert Lawrence Lessig, a Ranked Choice system would help to reduce the reliance on negative campaigning. If candidates and their supporters "are unsure about whether they'll win on the first ballot, they have a strong incentive not to denigrate or insult the candidates whose second-rank votes they might want." In Los Angeles, SEIU Local 99 went against the interests of their rank and file by spending nearly $1 million on the campaign, including "a misleading campaign against Goldberg", a candidate "with whom the union previously has gotten along." Helped by funding from education privatizer Eli Broad, Local 99 also ran grossly negative ads against Graciela Ortiz. While this strategy has already been called into question by the results of an election where Goldberg is far ahead and Ortiz is in the running for second place, under Ranked Choice it would have been devastating as they would have dissuaded their preferred candidate from being the second choice on either candidate's ballot.

Our governing systems, from our local School Board to our federal government, seems to be paralyzed by stalemate. This is a symptom of having limited, binary electoral choices. Ranked Choice Voting would help solve this problem and needs to be considered to put more power in the hands of We the People.
________________________________________
Carl Petersen is a parent and special education advocate, elected member of the Northridge East Neighborhood Council and was a Green Party candidate in LAUSD's District 2 School Board race. During the campaign, he was endorsed by Network for Public Education (NPE) Action and Dr. Diane Ravitch called him a "strong supporter of public schools." His past blogs can be found at www.ChangeTheLAUSD.com. Opinions are his own.

Related Topic(s): Ranked Choice Voting, Add Tags
Add to My Group(s)
Go To Commenting
The views expressed herein are the sole responsibility of the author and do not necessarily reflect those of this website or its editors.