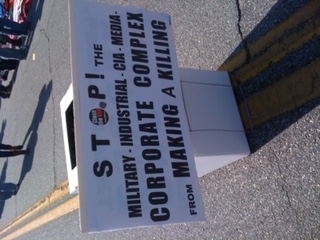 The problem of manufacturing consent for war.

Respect for national sovereignty has been the basis of international law designed to prevent preemptive warfare since the Treaty of Westphalia in 1648 ended the 30 Years War. The idea was to prevent wars by agreeing that empires and international alliances would not interfere with the internal affairs of any nation. The idea was rejected by later Empire builders, leading to two world wars. This practice of the US ignoring international law has become increasingly blatant ever since. It now poses a risk to peace and national sovereignty everywhere.

Americans are taught that Hitler's attempt at creating a fascist New World Order was the result of his insane personal ambition alone. Raised to believe that America is champion of freedom and democracy, most of us do not see that since the end of WWII the US has been working to create its own empire, one that is fast coming to resemble Hitler's. The major difference is that it is not run by a dictator but by an oligarchy who exert much of their influence through our privately financed system of elections and their control of an increasingly interlocked network of powerful corporations controlled by a relative few.

American exceptionalism: The American Empire is no longer a secret

Despite the obvious signs of a police state being created in the US with the passage of the Patriot Act, the 2012 NDAA authorizing Presidents to arrest and indefinitely imprison without charge Americans he or she deem enemies of the state and the NSA program of unlimited domestic surveillance, most Americans refused to see this trend until Trump made it obvious with his authoritarian behavior. Many think that everything will go back to normal if Biden defeats him in November. However, other than taking on a more sophisticated tone, the bellicose nationalism that so alarmed Democrats when Bush was in office continued largely unchanged during the Obama-Biden years. It seems that American exceptionalism is not a partisan issue. It's a fundamental principle in US foreign policy and whoever the Current Occupant of the White House is, they challenge it at their peril.

The Bush Doctrine of preemptive war has been replaced by the Obama Doctrine of "responsibility to protect," first implemented in Kosovo by Bill Clinton. Obama used the same rationale to justify intervention in Libya and Syria. In all three cases, the results have been disastrous. "Humanitarian intervention" differs in name only from the neocon practice of making war against (or at least destabilizing) any country that stands in the way of US geostrategic goals. The targets are the same. The legal principle of humanitarian intervention exists nowhere in international law. There is a good reason for that. It is a direct violation of the UN charter and of the earlier Kellogg-Briand treaty that made war illegal except in self-defense.

The origins of the post-WWII government propaganda apparatus

If we are ever going to see the end of war, it is imperative to understand the systematic way in which generations of Americans have been indoctrinated to accept the idea that it is inevitable. The explanation is not complicated. The problem is that so few people are working to educate Americans about their real history since WWII, leaving them to allow their leaders to repeat the same mistakes that lead to the downfall of all empires.

As detailed in The Irregulars, British Intelligence Services was very active in the United States prior to and after its entry into WWII. Given the prevalence of American isolationist sentiment prior to the attack on Pearl Harbor, its main mission was to promote pro-war propaganda and to discredit anti-interventionists. It worked tacitly with the Roosevelt government and later with the Office of Strategic Services to carry out this mission. Given the long British experience with subversion and espionage, the fledgling OSS was dependent on the BIS. This close working relationship led to the forging of personal bonds between the principals that continued after the creation of the CIA. At that time, the head of BIS in America successfully lobbied to have OSS chief Wild Bill Donovan placed in charge of the post-war US spy service.

The CIA was established by the National Security Act of 1947 that completely restructured the US military and intelligence agencies to reflect a new imperialist agenda. By this time, the war profiteers whose interests the operational division of the CIA serve had assumed so much influence over the US government and the media that they saw a huge potential to profit from building a sprawling military-industrial-government complex under the guise of fighting communism. In addition to creating the first peacetime intelligence service in the history of the US, it established the position of Secretary of "Defense," the Joint Chiefs of Staff and the "National Security" Council. In the aftermath of the war, a consensus was forged that "American interests" were synonymous with those of corporate powers that have essentially dictated foreign policy ever since. This assumption is best summarized in a statement by Cold war architect George Kennan of the State Department in 1948:

""we have about 50 percent of the world's wealth, but only 6.3 percent of its population"In this situation, we cannot fail to be the object of envy and resentment. Our real task"is to devise a pattern of relationships which will permit us to maintain this position of disparity without positive detriment to our national security"We need not deceive ourselves that we can afford today the luxury of altruism and world-benefaction"We should cease to talk about vague and - for the Far East - unreal objectives such as human rights, the raising of the living standards, and democratization. The day is not far off when we are going to have to deal in straight power concepts. The less we are then hampered by idealistic slogans, the better."

That year, a turning point in US and world history had occurred. On Kennan's advice, Truman signed a National Security Directive authorizing the CIA to conduct covert operations in such manner that the US government could plausibly deny them if uncovered. The decision to extend the actions of the CIA beyond intelligence gathering for the president would prove to have fateful consequences. From NSC Directive 10/2:

""such operations shall include any covert activities related to: propaganda, economic warfare ; preventive direct action, including sabotage, anti-sabotage, demolition and evacuation measures ; subversion against hostile states, including assistance to underground resistance movements, guerrillas and refugee liberation groups, and support of indigenous anti-communist elements in threatened countries of the free world. Such operations shall not include armed conflict by recognized military forces, espionage, counter-espionage, and cover and deception for military operations. "

The importance of propaganda in waging the Cold War cannot be overstated. Without it, American military intervention would never have been tolerated by a public that since WWI had largely heeded Washington's advice to "avoid foreign entanglements." The CIA role in creating propaganda was well established by the early 1950's when the CIA Director of Office of Policy Coordination (the covert branch of the CIA at that time) established Operation Mockingbird This program explicitly authorized the CIA to carry out propaganda operations in foreign media, including that of US allies in Europe. Building on relationships established by the BIS and OSS with friendly journalists and publishers, the CIA created an elaborate network of news sources that disseminated propaganda that not only spread disinformation to citizens of other nations that was picked up by US media, but also directly to Americans.

Related Topic(s): Humanitarian Intervention; Ned; Responsibility To Protect, Add Tags
Add to My Group(s)
Go To Commenting
The views expressed herein are the sole responsibility of the author and do not necessarily reflect those of this website or its editors.