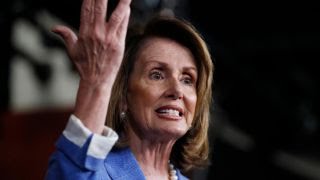 Nancy Pelosi became a member of the House of Representatives after winning a 1987 special election that captured the attention of activists in San Francisco and across the country. The fight that year was between Democrats with different visions of how the party and the country should proceed. And three decades later, that question remains unresolved as Pelosi again bids for the speakership.

The daughter of a former Baltimore mayor and New Deal-era Democratic congressman, Pelosi campaigned in 1987 as a leader of the California Democratic Party. She had the backing of party insiders in San Francisco and beyond. Her chief rival was Harry Britt, a gay-rights activist who had been appointed after the assassination of Harvey Milk to fill Milk's place on the San Francisco Board of Supervisors.

"Harvey Milk convinced a lot of lesbians and gay men that we should put our anger and our dreams into politics," explained Britt, an ardent campaigner for social justice. "When he was killed he left a will in which he named me as a possible successor. I held that office for 14 years, and...generally used the office as a place where people who wanted to change things could come and work with me." Britt campaigned as a proud democratic socialist who'd been a leading figure nationally in the Democratic Socialists Organizing Committee and then Democratic Socialists of America.

A New York Times report at the time explained that "both he and Mrs. Pelosi are Democrats, but they represent different factions of the party," and noted that "he argued that as a homosexual, he would work harder in Congress to end the AIDS epidemic," while highlighting concerns that Pelosi was "well-connected to party leaders but out of touch with the interests of rank-and-file voters."

Pelosi won with 36 percent to Britt's 32.5 percent. Britt continued to serve as a supervisor until 1993, and has remained an outspoken progressive critic of neoliberalism, dogma, and demagoguery. If Harry Britt were a congressman today, he'd be a hero of the left and, perhaps, a leader among House Democrats.

Related Topic(s): Democrats; Nancy Pelosi; Politics; Progressive Candidate; Speaker Of The House, Add Tags
Add to My Group(s)
Go To Commenting
The views expressed herein are the sole responsibility of the author and do not necessarily reflect those of this website or its editors.