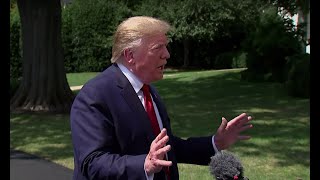 President Donald Trump: .I am the chosen one..
(Image by YouTube, Channel: syracuse.com)   Details   DMCA

Yes, I know. I am lining up on the wrong side. You are supposed to hate him. The presstitutes hate Trump. So does the Democratic Party, part of the Republican Party, the military/security complex, the entirety of the liberal/progressive/left, the universities, feminists, and Washington's vassal states. No one likes him but the "racist, white supremacist Trump deplorables."

Nevertheless, I feel sorry for him. I started feeling sorry for him when he announced he would run for President of the United States. You see, I had inside information. I had held a presidential appointment from a President of the United States. I ended up fighting battles for him against entrenched interests who opposed his policies to end stagflation and the cold war. I helped to win the battles for him, as his accolades to me testify, but my success ended any career for me in government.

I knew that, unlike Reagan who had prepared his run over the years and had a movement behind him, Trump had not. Moreover, also unlike Reagan, Trump had no idea of what he was walking into, and no idea of who to appoint to important offices who might be inclined to help him. Generally speaking, the value of a presidential appointment, such as the one I had, lies NOT in helping the president, but in helping the ruling private establishment. Any Assistant Secretary can be very helpful to private interests and end up a multi-millionaire. Indeed, most of them do.

But I put the country's interest ahead of mine and helped Reagan to cure stagflation and to end the cold war. Curing stagflation was perceived as a threat by the economics profession which had no cure and didn't want to be shown up by dissident supply-side economists, and much of Wall Street misunderstood what the media called "Reaganomics" as more inflationary deficit spending that threatened their stock and bond portfolios. Ending the Cold War threatened the budget of the military/security complex, a dangerous undertaking.

A decade or two ago a person I had known when I was in Washington, who was a professor in Massachusetts, telephoned me. He said he had just returned from Washington where he had had lunch with some of my former colleagues. He had asked them about me, and according to his report, they said: "Poor Craig. If he had not turned critic, he would be worth tens of millions of dollars like us." My former acquaintance said that he stood up and said that he didn't realize that he was having lunch with a bunch of whores and left.

Obviously, my acquaintance did not intend to return to a Washington career.

As I predicted would be the case, Trump had no idea who to appoint to help him. Consequently, he appointed everyone opposed to his renewal of American jobs and peaceful relationships with Russia, China, Iran, and the Middle East. So nothing has changed. Why in the world a successful person covets an office where failure is the norm is beyond me.

Trump's first, and perhaps only, term has been consumed in the Russia-gate orchestration. John Brennan, the CIA director, and James Comey, the FBI director, along with President Obama, the Obama Justice (sic) Department, the presstitute American media, and the Hillary Democratic National Committee concocted an absurd investigation of the elected President of the United States as a Russian agent, a tool of Vladimir Putin's plan to rule America.

How anyone could believe such a preposterous story is incredible. But Democrats and the presstitutes claimed it was true. But Mueller was unable to establish it. After his failure, Mueller's testimony before Congress was immensely embarrassing to him, the Democrats, and the whore American media.

Trump, with the deck cleared, hoped to hold accountable those who tried to overthrow him in a coup. Comey was investigated. He was found indictable on a number of offenses. The Department of Justice (sic) Inspector General's report concluded:

"The IG report confirms Mr. Comey improperly kept FBI files on President Trump at his home and that he illicitly leaked these FBI files to the New York Times in order to advance his personal agenda of getting a Special Counsel appointed to target the president. Comey also misled both the FBI and Congress about his handling of these documents. On top of all of that, in violation of law, he kept and disclosed classified information."

Here is Howie Carr's summary: Let me summarize the 80-plus pages for you by pulling out some quotes: "Violated Department and FBI policies. ... Comey Improperly Disclosed ... Comey's Improper Disclosures... Comey's characterization finds no support in the law and is wholly incompatible with the plain language of the statutes, regulations and policies defining federal records, and the terms of Comey's FBI Employment Agreement. ... Comey violated ... this assertion is without legal basis. ... Unauthorized disclosure ... Former Director Comey failed to live up to this responsibility ... a dangerous example..." And so on.

The IG report generously forgot that Comey went before the FISA Court with a fraudulent request, which is a felony.

Related Topic(s): Deplorables; Giuliani Rudy; James Comey; Justice; President Trump; Presidential Powers; Presstitutes; Republican, Add Tags
Add to My Group(s)
Go To Commenting
The views expressed herein are the sole responsibility of the author and do not necessarily reflect those of this website or its editors.