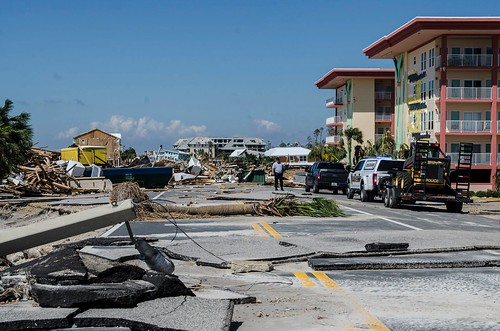 Florida residents from the eastern part of Panama City Beach to Apalachicola now know what a war zone is like. 750,000 people are without power and without water. Thousands of homes and commercial structures no longer exist. Mexico Beach has been more or less wiped off the face of the earth. Many areas are still inaccessible. Many people are still trapped in place because of debris and downed trees across roads.

Families searching for missing family members are at times obstructed by police trying to keep looters and gawkers out of the area and trying to save what little traffic capacity there is for emergency and repair crews. It is difficult to image people so lacking in humanity that they go to loot what little remains of the property of such damaged people.

But perhaps it is not difficult to image such people. Perhaps such people have been running US foreign policy since the Clinton regime. If you look at these photos of the damage:

https://weather.com/safety/hurricane/news/2018-10-09-hurricane-michael-photos, you will have an idea of the damage "our" government acting in "our" name has inflicted on eight countries since the Clinton regime: Serbia, Afghanistan, Iraq, Somalia, Libya, Syria, Pakistan, and the ongoing atrocity in Yemen. Anyone looking at the devastation of the Florida panhandle from Panama City to Apalachicola could think they are looking at the work of Dick Cheney and his Zionist neocon warmongers that devastated the Middle East and North Africa.

support Christine Blasey Ford for accusing Kavanagh of attempted rape despite her inability to substantiate her charge. Will the compassion and empathy that responds to ideological crimes such as those ascribed to "white heterosexual victimizers," gun owners, and illegal immigration opponents also respond to the victims of Hurricane Michael and US foreign policy?

Why is it that the liberal-progressive-left can get so upset about an alleged attempted rape 30 or 40 years ago but accept without protest Washington's destruction of the lives, prospects, and infrastructure of millions of peoples in eight countries? All of the immigrants about which Trump complains are people fleeing from America's wars on their countries. If America and Europe do not want refugees, why do they engage in wars that produce refugees?

Is this simple question beyond the intelligence of Western politicians?

Are Americans aware that the latest national defense posture statement reaffirms the neoconservative priority that America prevail over the world? Do Americans understand that Washington considers Russia and China to be threats simply because they have independent foreign and economic polcies? Do Americans understand that American hegemony means that no country is permitted to be sovereign?

No, of course, they don't. The presstitute media doesn't tell them.

Related Topic(s): Imperialism; Military Occupation; Neoconservatives; Neoconservatives; Occupation, Add Tags
Add to My Group(s)
Go To Commenting
The views expressed herein are the sole responsibility of the author and do not necessarily reflect those of this website or its editors.