The GOP's environmental policies are likely to bring about a massive abortion of humanity. Denying medical care to people who can't afford it shortens lives. War is abortion of born people. Mistreatment of desperate asylum seekers is brutal. Odd that conservative Christians support these and other GOP policies.

Republicans say they are pro-life. But that applies, if at all, only to the unborn -- including tiny embryos with no memories, thoughts, personality or consciousness.

When it comes to born people, Republicans are decidedly pro-death.

Republican opposition to regulation of pollutants, pesticides, and other environmental risks already results in many deaths from cancer, lung disease, heart disease, and metabolic disorders. (See the references at the end of this article for substantiation of these claims.) Republican environmental policies are raising the likelihood of catastrophic climate change.

Republican opposition to universal healthcare and to regulation of drug prices dooms millions of people to poor health and early deaths.

Disastrous, ill-begotten wars and proxy wars launched by the US -- in Vietnam, Iraq, Afghanistan, Indonesia, South America, and elsewhere -- have killed millions of people and have caused great suffering and widespread migrations. . By draining money from more productive uses, military spending lowers the quality of life and shortens lives.

It is true that many Democrats have supported military action and high military spending, but in recent years it's Republicans who are most to blame, especially for the disastrous war in Iraq launched by George W. Bush and Dick Cheney. This year the House version of the National Defense Authorization Act allocates $13 billion less to the Pentagon than does the GOP Senate's version. Furthermore, in the House, not a single Republican voted for the Democratic House NDAA bill, because Republicans wanted higher spending, more money for tactical nukes, and freer rein for Trump in Iran and along the southern border with Mexico.

Likewise, Republican voters are more in favor of military action, including the use of nuclear weapons. See Do Americans Support Military Action Against Iran? Republicans do. See also One-Third of U.S. Supports Nuclear War on North Korea, Knowing It Would Kill One Million, Report Shows. The latter article says, "While most respondents overall opposed military action against North Korea, the 'majority of Trump supporters prefer the US strike in every scenario, except when confidence in the effectiveness of the US conventional strike is 50 percent'and even then it remained at 44 percent as opposed to a mere 8 percent for non-supporters."

Republicans get all worked up about abortions of tiny embryos with undeveloped nervous systems, lacking memories, personalities, and substantive consciousness.

Why don't Republicans get worked up about the deaths of born people? 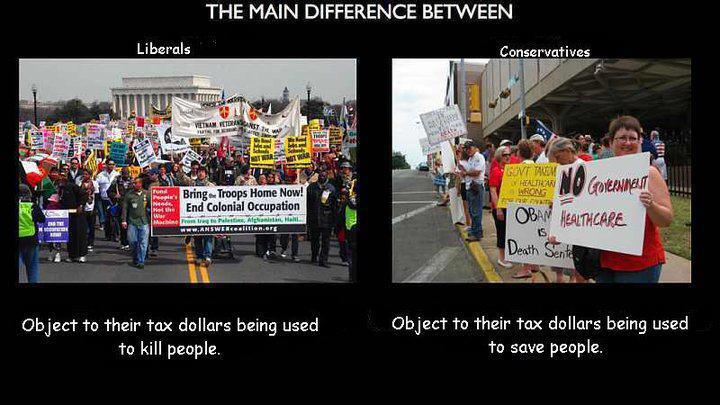 Many daycare centers and schools are dangerously close to busy roads.
http://www.invw.org/series/exhausted-at-school/

Related Topic(s): Abortion; Immigration; Peace_War; Republican, Add Tags
Add to My Group(s)
Go To Commenting
The views expressed herein are the sole responsibility of the author and do not necessarily reflect those of this website or its editors.