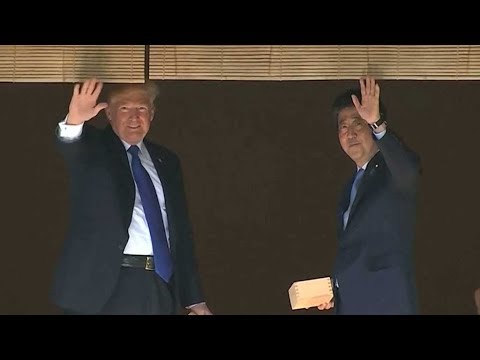 The 19th Party Congress has made it very clear that "socialism with Chinese characteristics" -- as codified by President Xi Jinping -- is China's roadmap ahead. Not only the strategy graphically eschews those much-lauded "Western values"; it will, in Xi's own words, offer "a new option for other countries and nations who want to speed up their development while preserving their independence."

Xinhua even dared to venture, "the 21st century is likely to see capitalism lose its appeal while the socialist movement, led by China, rapidly catches up."

To say this won't go down very well in the West, especially in the US, may be the understatement of the century -- even considering that the Chinese system is more like "neoliberalism with Chinese characteristics."

It's enlightening to crisscross what happened in Beijing with what was happening in Washington on the eve of President Trump's trip to Asia, when he will visit China but also Japan, South Korea, Vietnam and the Philippines. Discussion of virtually all the key issues in Asia-Pacific will be on the table.

Asia-Pacific is where the real action is -- geopolitically and geo-economically. And once again, the number one issue in the intractability stakes will be the DPRK.

At a recent meeting with top US military and intelligence chiefs Trump, referring to the DPRK, asked to be provided "with a broad range of military options, when needed, at a much faster pace."

For his part, Pentagon head Mattis has emphasized that "the US army must stand ready." He has been extolling his targeted military audience to read T.R. Fehrenbach's This Kind of War -- a history of the 1950-1953 Korean War, and even extracting a chilling quote from it; "You may fly over a nation forever, you may bomb it, atomize it, pulverize it and wipe it clean of life. But if you desire to defend it... you must do this on the ground the way the Roman legions did: by putting your young men in the mud."

Yet the real story regarding the Trump meeting is what was taking place behind the scenes involving key business/economic decision makers -- call them some of the Masters of the Universe -- as revealed to me by a high-level intel source privy to these meetings. The conclusions of the debate were then presented directly to Trump, ahead of his visit to Asia.

The source stressed how principals in these meetings were familiar with "key strategists above Mattis who were responsible for most of the major US defense programs in place." They know, for instance, how "we are four generations behind in defensive missiles which seals the Russian airspace" -- even though any expert in US Think Tankland persists in total denial.

The number one concern is about "the present satellite and missile capacity of North Korea to detonate nuclear bombs over the US knocking out the entire electronic infrastructure through a electromagnetic impulse (EMP) attack liquidating 90% of the American population within a year. This concurs with public statements by Putin that tiny countries in the future can obtain the capacity to destroy superpowers."

Putin's comment should be interpreted as this possible DPRK threat being capable of affecting a very advanced nation much more than those in the Global South; a completely different dimension compared to the former MAD concept of mutually assured (nuclear) destruction.

In his own presentation to Trump, Mattis emphasized the EMP "as a potential horror beyond imagination. Within 24 hours Walmart shelves would have nothing on them. Food distribution would grind to a halt. Food riots all over the US would take place. 80% of the population would perish according to Mattis."

The debate then moved to whether the DPRK already possesses submarine-launched ballistic missiles (SLBMs). According to Heritage's Bruce Klingner, the DPRK has 20 Romeo class submarines capable of carrying SBLMs (their range is 9,000 miles; the distance from Pyongyang to New York City is 6,783 miles). True, they are old, built in the 1950s. The question is open on how far advanced the DPRK is in miniaturization.

Related Topic(s): Dprk; Korea; Military; Threat, Add Tags
Add to My Group(s)
Go To Commenting
The views expressed herein are the sole responsibility of the author and do not necessarily reflect those of this website or its editors.