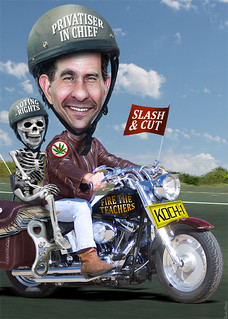 Scott Walker is the perfect example of how billionaires can purchase justice a la carte to protect their pet politicians.

Now that's not to say that Scott Walker himself is a billionaire. But he has a well-known relationship with billionaires like the Koch Brothers -- and their assorted front groups.

And in short, that's why the Wisconsin Supreme Court dropped its John Doe probe into whether Scott Walker criminally violated campaign finance laws to win his recall election in 2012.

The Koch brothers and their front groups, particularly the Wisconsin Club for Growth, along with the Wisconsin Manufacturers and Commerce group (WMC) have been setting up this ruling for almost a decade.

This story starts in 2007 with an election for an open seat on the state Supreme Court.

Total spending on that election was four times the previous record for a Wisconsin Supreme Court race. And that was just to keep a liberal from winning the seat.

And In 2008, those same groups spent $2.7 million to unseat liberal justice Louis Butler and to put in place conservative Michael Gableman.

But after two elections of blatant spending by partisan interest groups, the legislature pushed back and passed the "Impartial Justice Act." It set up a clean campaign finance system in Wisconsin and it even included a matching funds provision to help candidates counter negative ads against them.

But by then, the march to statewide plutocracy was in motion. And the Kochs weren't going to let finance laws block them from owning the state government.

Walker won his first gubernatorial election in 2010, riding a wave of finance and support from Americans for Prosperity. That's another Koch money front group.

And when he took office, Walker and the newly conservative legislature quickly and quietly stuck a repeal of the Impartial Justice Act into his first state budget in 2011.

Later in 2011, one of the conservative judges on Wisconsin's Supreme Court was up for re-election -- David Prosser. The state was in upheaval over Walker's assault on public unions, and the Kochs couldn't afford to lose a seat on the court.

So the Wisconsin Club for Growth and WMC spent an estimated $2.5 million to keep conservative Justice David Prosser on Wisconsin's Supreme Court -- while his own campaign only spent about $700,000.

He only won re-election by 7,004 votes. But $2.5 million is a small price for billionaires to protect a shill like Walker.

Related Topic(s): Billionaires; Koch Brothers; Scott Walker, Add Tags
Add to My Group(s)
Go To Commenting
The views expressed herein are the sole responsibility of the author and do not necessarily reflect those of this website or its editors.