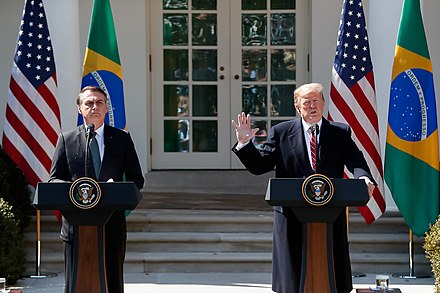 Like so many other countries during the age of late-stage capitalism, Brazil has slipped into a dystopia. The record Amazon fires caused by Jair Bolsonaro's pro-corporate policies and the indigenous genocide caused by Bolsonaro's disregard for tribal sovereignty have been just the beginning of the horrors. In the first year or so after Bolsonaro became president, the country's social safety net has been dismantled to catastrophic effect.

This February, Brazilian writer Eric Nepomuceno wrote that "Bolsonaro has destroyed Brazil in 400 days," lamenting the rapid destruction of the country's educational system, the mass unemployment as a result of Bolsonaro's neoliberal policies, and the relentless emptying of the country's decades-old social programs. It was right after then that Covid-19 reached the country-at which point these austerity measures, combined with Bolsonaro's blatant pandemic denial, made Brazil into one of the most impacted countries in the world.

As time goes on, the situation gets worse and worse. Brazil is now at over 94 thousand Covid-19 deaths amid a pandemic fatality spiral that appears to still be accelerating. The inequality that Bolsonaro has so greatly exacerbated is making poor and indigenous communities suffer vastly disproportionately to the country's increasingly entitled elites. Bolsonaro has been mobilizing his supporters to threaten violence against officials who seek to defend Brazil's democratic institutions, and Bolsonaro's administration has been demonizing demonstrators as "terrorists" while threatening military repression.

All of the death and suffering that's resulting from Bolsonaro's regime is part of the cost of preserving U.S. imperialist hegemony over Latin America. We know this not just because of the ways that Bolsonaro has helped Washington militarily threaten Venezuela, or because Bolsonaro's election was immediately celebrated by the U.S.-centered corporatocracy, but because there's evidence that the CIA directly helped get him elected in 2018.

In October of 2018, during the last weeks before the election, Marcelo Zero of Brasil Wire wrote that "it seems obvious that there is a finger"--"-or an entire hand"--"-of foreign intelligence agencies at work, mainly North American, in the Brazilian elections. The modus operandi shown in this final stretch is identical to that used in other countries and requires technical and financial resources and a level of manipulative sophistication that the Bolsonaro campaign does not seem to have on its own. The CIA and other agencies are here, acting in an extensive manner." The factors that prompted this observation pertain to the ways that information surrounding the election paralleled past U.S.-led propaganda campaigns.

Zero's conclusion about foreign intelligence agents being behind these disinformation efforts was at the time supported only by speculations. But these speculations lined up with the past CIA disinformation campaigns that have been proven to be real, and that have often involved attempts to sway an election in favor of a pro-Washington candidate.

In his essay A Timeline of CIA Atrocities, Steve Kangas listed "false stories about opponents in the local media" as one of the methods the agency has used throughout its numerous political interventions in Latin America. The slanders directed at Bolsonaro's opponents also parallel the lies that other branches of the Washington imperialist propaganda machine have used; the strategic disinformation that Radio Free Europe used during the Cold War and the lies that Voice of America told to locals during the Tiananmen Square conflict come to mind.

Related Topic(s): Austerity; CIA; Covert Ops; Disinformation; Fascist; Repression, Add Tags
Add to My Group(s)
Go To Commenting
The views expressed herein are the sole responsibility of the author and do not necessarily reflect those of this website or its editors.