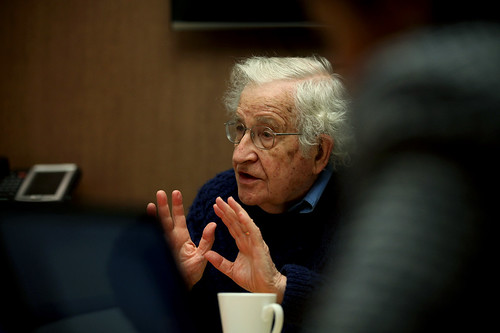 On Zoom the evening of Bastille Day, which commemorates a victory of democracy over monied interests and monarchism, Greg Palast and Noam Chomsky discussed Palast's new book published today, How Trump Stole 2020.**

Amy Goodman was a superb moderator.

The event was sponsored by Seven Stories Books, Jacobin magazine, and Project

Palast began by reading from his page 2, which asks how such a psychotic narcissist (the verdict of

professionals; GP's language is far more colorful) was able to win in 2016--how could we

have allowed this to happen?

Well, it isn't our fault, the author reassures us. Clinton lost in 2016 but millions of votes

were stolen in myriad ways I gave up counting years ago. We must wise up to make sure this grim history doesn't repeat itself.

Professor Chomsky was hardly a cheerleader. In a grim, aged monotone, he said that the

the super-rich happy so that money won't leave our shores. The GOP is dedicated to the welfare of corporations

and these tycoons. The Republicans are principled people, dedicated to protecting the minority from the majority, and originalists, hearkening back to the intentions of the founding fathers, who opposed the depredations of democracy.

Chomsky quoted one source, Michael J. Klarman's The Framers' Coup: The Making of the United

States Constitution. According to democracy theory, he said, the majority are stupid and should be

Related Topic(s): 2016; Books; Congress; Corporations; Democracy; Democratic; Election; Environmentalists; Fathers; Greg Palast; (more...) Money; Policy; Quagmire; Republican; Theft; Trump; Tyranny, Add Tags  (less...)
Add to My Group(s)
Go To Commenting
The views expressed herein are the sole responsibility of the author and do not necessarily reflect those of this website or its editors.

Other Series: View All 69 Articles in "discrimination"

Other Series: View All 70 Articles in "democracy"

Other Series: View All 72 Articles in "activism in action"