Inside the pro-Israel campaign to crush Labour's left-wing insurgency. 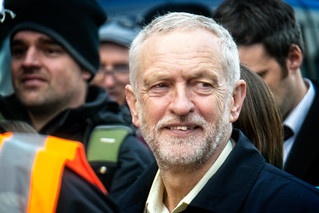 Chris Mullins' 1982 political thriller, A Very British Coup, introduced British readers to a Marxist former steelworker named Harry Perkins who sends his country's political elite into a frenzy by winning a dramatic election for prime minister. Desperate to foil his plans to remove American military bases from British soil, nationalize the country's industries and abolish the aristocratic House of Lords, a convergence of powerful forces led by MI5 security forces initiate a plot to undermine Perkins through surveillance and subterfuge. When their machinations fail against a resolute and surprisingly wily politician, the security forces resort to fabricating a scandal, hoping to force him to abdicate power to a more pliable member of his own party.

Adapted into an award-winning 1988 television miniseries, Mullins' script closely resembles the real-life campaign to destroy the Labour Party leader Jeremy Corbyn. A left-wing populist with pronounced anti-imperialist leanings, Corbyn is seen by his opponents in much the same light as Perkins was in Mullins' treatment: "You're a bad dream. I could always comfort myself with the thought that socialism would never work," Percy Brown, an aristocratic MI5 chief sworn to the prime minister's ruin, told his enemy. "But you, Mr. Perkins, could destroy everything that I've ever believed in."

After years as a backbencher in parliament railing against Tony Blair's business-friendly agenda and mobilizing opposition to the invasion of Iraq, Corbyn emerged last summer as a frontrunner for Labour leadership. Against vociferous opposition, he stunned his opponents with a landslide victory, winning nearly 60% of the vote with help from a grassroots coalition of Muslim immigrants, blue-collar workers and youthful left-wing activists.

Just as Corbyn's success stunned the party establishment, his rise infuriated the country's powerful pro-Israel forces. Corbyn's parliamentary office has served as a hub for the Palestine solidarity movement and his name has been featured prominently on resolutions condemning Israeli atrocities. At an election forum convened last year by the Labour Friends of Israel, Corbyn redoubled his support for key components of the boycott, divestment and sanctions (BDS) movement that is pressuring Israel to respect the human rights of Palestinians while Blair's favored candidate, Liz Kendall, said she would fight it with "every fiber in my body."

Related Topic(s): Anti-semitism; Coup; Jeremy Corbyn; Labour Party; Palestinian; Smear Tactics; Zionism, Add Tags
Add to My Group(s)
Go To Commenting
The views expressed herein are the sole responsibility of the author and do not necessarily reflect those of this website or its editors.