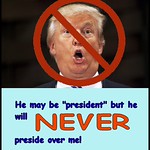 With every wrong move by the Trump administration to control the many disturbances now engulfing our country, Trump's ratings and chances for re-election sink.

Very prominent in the news today is his police-state handling of the protests in Portland, Oregon, with threats to do the same in other cities that challenge his policies. Next, and more crucial to the pandemic that is paralyzing the nation, is Trump's muddling approach to countering the COVID-19 crisis, swelling the death rate, by prioritizing the re-opening of businesses and schools, while disparaging the wisdom of knowledgeable health scientists and common sense.

Add to the turmoil Trump's contradicting mass sentiment to remove statues and symbols glorifying the treacherous generals and culture of racial debasement of the confederacy. This agrees with his expressions of sympathy with radical right-wing groups on occasion. Now, this week, we read of Trump's refusal to abide by the rulings of federal judges and the Supreme Court to extend benefits of the DACA legislation. Then there is a stream of policies rewarding the wealthy and privileged at the expense of working and distressed people. The list goes on and on, as reported in news sources, except those that promote his re-election.

Trump is at war with his country. Instead of showing some wisdom and restraint in his actions, and respect for the laws and better traditions of his country, as would be expected of a responsible leader of a major democratic nation, he chooses to do whatever serves his personal advantage and distorted views.

But we see signs of his unraveling as his polls are falling, although it is difficult to distinguish from his "normal" behavior. Without conceding his mistakes, he quietly switched positions on wearing masks. His actions, such as what is happening in Portland, may become more desperate. He may be attempting to upset the coming election by preventing mail-in ballots by obstructing the postal service.

The really sad thing about this situation is that so many people still support Trump. Either they are totally oblivious to his faults by watching distorted news media, or see them as advantageous to their viewpoints; or, in their political naivety, they simply never deviate from their traditional party line. Many of these people will unwittingly vote against their own interest, as frequently pointed out.

These people reflect a fundamental fault in the American political culture and, eventually, in our public-education system. If this were not the case, then someone like Trump would never have been elected nor would his name appear on the 2020 ballot.

Our present election culture is similar in many ways to earlier days when local political-machine gangs played a heavy role in determining election outcomes. Today, aside from blatant corruption in voting procedures, outcomes are determined mainly by biased advertisements and media influence proportional to money contributions.

To address the crucial issues affecting everyone in the fragile state of the contemporary world demands not only leaders of high competence, integrity and trust, but also well-informed citizens who can make intelligent choices in their voting. Matters of vital concern to the nation should be essential topics of discussion throughout our educational systems, of high priority, science-based, and free of biased censorship - starting even in grammar school. The foremost example should be environmental issues, but certainly would include questioning basic premises of our government and economic systems, and how they affect our health and poverty. There are many youth activists, like Greta Thunberg, who plead for widespread public enlightenment on these vital topics. How this might be accomplished in our diversified school systems throughout the nation, I leave for further speculation.

Related Topic(s): Crisis; Education; Election; Polls; Trump, Add Tags
Add to My Group(s)
Go To Commenting
The views expressed herein are the sole responsibility of the author and do not necessarily reflect those of this website or its editors.