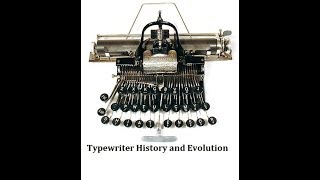 Dear Readers, a small number of you seem to be obsessed and frustrated by my typos. Allow me to explain to you. When I was in high school we were advised, if we were university material, to take the typing course because college professors, unlike high school teachers, would look with disfavor on the task of reading our handwritten work. So I took the typing course.

In those far away days electric typewriters did not exist. We had manual typewriters that relied on our finger strength to make the key hit the ribbon and transfer ink to the paper. In order to pass the course we let our fingers rest on the keys so that we could make the required number of words per minute with minimum errors.

Then came computers, as they are called. The keyboards are even more sensitive, and by this stage in my life, unable to know where my fingers are as I cannot rest them on the keys, I make numerous typos.

I also make typos and spelling errors for other reasons. I am focused on sentence structure for clarity. I am concerned with the clarity of content. When I proof read, I am proofing content. After all the many millions of words that I have signed my name to, I cannot proof read myself except for content, and even here I fail on occasion.

My only writings completely free of any typos, misspellings and grammar mistakes are my first book and my contributions to scholarly journals when I was a young man and was unpressured by rapidly developing events. My only scholarly writing marred not only by typos but also by word confusion -- for example, "access" in place of "assess" was my first scholarly article published in Classica et Mediaevalia in 1964 when I was a graduate student as a member of Merton College, Oxford University. Obviously, the editor of the distinguished European scholarly journal didn't know the English language any better than I did.

Despite my word errors, the content of my first scholarly article survived my word and spelling mistakes and became required reading for years in texts used in medieval economic history and urban planning until scholarship moved on to other issues. The editors of the texts knew what I meant and made the corrections.

Much of English spelling differs from American spelling. It took some time to learn, for example, that in England labor was labour. In those days the Brits looked with favor on their language and did not appreciate the Americans' use of it. Today it is unclear what the language of Britain is.

My spelling is also hurt by my study years ago of the German language, some words of which are similar in their spelling to English. This results in the letter "k" and other letters appearing where they don't belong.

Scholarship seldom has the urgency of reporting on, and explaining, currently unfolding events, and hurry can be an enemy of spelling accuracy.

Fortunately, one of the many websites that republishes my columns has the best proof reader in the world. Her name is Sheila Samples. She is so kind that she sends me corrections of my mistakes, and I then go to my postings and correct my errors. So, if you cannot stand my mistakes, just wait a day or two before you read my column. By then Sheila will have made it perfect.

Related Topic(s): Computers; Correction; Grammar; Language; Mistakes; Readers; Writing, Add Tags
Add to My Group(s)
Go To Commenting
The views expressed herein are the sole responsibility of the author and do not necessarily reflect those of this website or its editors.