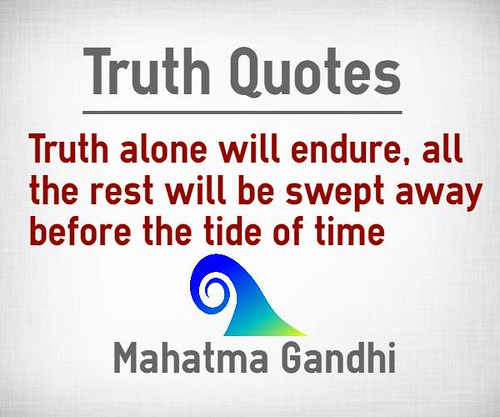 Truth Quotes all the rest will be swept away
(Image by praba_tuty)   Details   DMCA
In a chaotic world of fake news, conspiracy theories, high drama and rapid change, how can we ferret out the truth?

I have no way to answer that within the realm of standard logic, so that path seems like a dead end.

So where does that leave us?

As a person with a spiritual (not religious!) perspective, the only sensible answer that I can see has to do with humankind's ethical, moral and spiritual evolution. I mean this in the broadest sense of "spiritual," in which I encompass people of many paths, including those who call themselves atheists, who have often seemed to me to be much more ethical/moral/spiritual than the average "religious" person. To me, "spiritual" is not about a godhead, although religion is.

Humankind is in a place that requires moral evolution. What better way to encourage that than to foist a situation on an unwilling humanity that would get everyone's attention? Like a pandemic, perhaps?

And if moral/ethical/spiritual development in the search for truth is what is being called for from humanity, then the sooner we get to work on that, the sooner we won't have a need for a moral kick in the butt like a pandemic.

One of the best ways to ferret out truth, is to rid oneself of the inner trash that gets in the way of clarity. We all know that we make better decisions when we are satisfied, clear of mind or happy, than we do when angry, fearful or in revenge mode.

So the ethical imperative here is for each person to do their inner/moral/spiritual work in order to be more clear-minded and open to discerning truth.

How do we do it? The "how" varies with the person, but moments of clarity can spring from engaging in meditation, healthful activities like exercise or yoga, meaningful ritual, creative pursuits and honest introspection.

How many times have we had a feeling or intuition about something that later proved to be correct? This is usually hit and miss for most people, but it can be developed into a skill and utilized.

We subscribe to victimhood if we can only respond to outer events with a reactive emotion. Choosing our perspective is possible even when outer circumstances seem dismal - and that, to me, is the "Work" we are called to do. It is only when we choose to remain in a place of centeredness or clarity when faced with outer chaos that we genuinely retain our power. That is what true "response-ability" is.

We always have the freedom to choose how we want to feel regardless of conditions.

Related Topic(s): Intuition; Media Fake News; Meditation; Spiritual; Truth, Add Tags
Add to My Group(s)
Go To Commenting
The views expressed herein are the sole responsibility of the author and do not necessarily reflect those of this website or its editors.

STAY IN THE KNOW
If you've enjoyed this, sign up for our daily or weekly newsletter to get lots of great progressive content.
Series: "Spiritual Politics"