My guest today is Steven Rosenfeld, author, editor and chief correspondent of Voting Booth, a project of the Independent Media Institute.

Joan Brunwasser: Welcome back to OpEdNews, Steven. We are in the midst of election season. How has COVID-19 impacted campaigns and voting itself so far?

Steven Rosenfeld: It's turned the 2020 elections completely upside down. On March 10, I was in Michigan for its presidential primary. Two days later, the pandemic hit like a tidal wave. The presidential primary season stopped. People's focus shifted to buying food and then sheltering in place. In election policy circles, there was a widespread, though not unanimous assumption, that voting by mail would be an easy solution. It is now emerging that it is more easily said than done, especially when there's Republican opposition. Look at what happened in Wisconsin on April 7.

As far as emerging trends go, the states that have had the biggest voting rights fights in the past decade are becoming the settings where the biggest vote-by-mail battles are emerging. Voting by mail is not a simple process. Essentially, you have to register for a second time. There are so many steps along the way where the opponents of higher turnout elections can impose barriers. And there are finish line hurdles, where ballots are and aren't counted.

This is not happening in every red-run state. Not every Republican is embracing a new wave of voter suppression. But it is unfolding in the swing states and increasingly purple states where the GOP has dominated for years, but their base is aging and shrinking. The first evidence surrounds how easy or hard it is to get an absentee ballot in 2020's remaining primaries. That's important because these elections will give us clues about what to watch out for in the fall.

JB: Before we move on to what lies ahead, can you take a moment to recap what exactly happened in Wisconsin's primary, before and afterward, and why it matters? Many of our readers have not been following this unfolding story closely.

SR: Wisconsin was a "perfect storm" filled with warnings for the rest of 2020. To start, as a backdrop, the Trump campaign has said that it is the number one battleground state in 2020. Remember that RNC lawyer saying that the GOP was the party of voter suppression? That was last November, speaking in Wisconsin. He said Trump loses unless he wins the state. 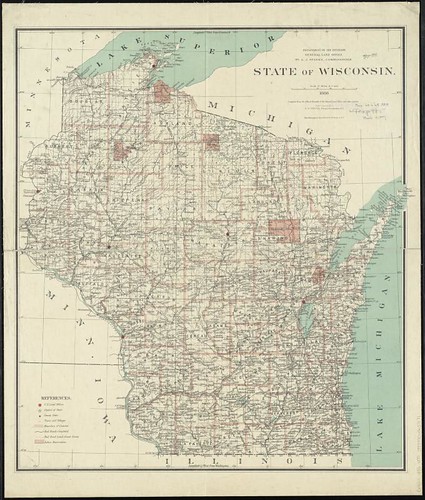 The Purple State of Wisconsin
(Image by Norman B. Leventhal Map Center at the BPL)   Details   DMCA

Politically, it's been under attack by right-wingers for years. Today it has a Democratic governor and Republican majority legislature--due to 2011's extreme gerrymander. Between the time that the governor was elected and took office, the legislature, in a lame-duck session, passed all of these laws taking away gubernatorial authority. This also happened in North Carolina. This power grab resurfaced at the last minute in the April 7 primary in ways that have nationwide implications this year.

Anyway, after Michigan's March 10 primary, every state except Wisconsin postponed their April primaries due to the pandemic. In Wisconsin, the Democratic governor did not immediately order a delay, even though the governor of Ohio did at the last minute. The legislature also didn't act, because, as conservative pundits from the state noted, one of the races on the ballot was for a state supreme court seat. The GOP leadership believed that their chances of getting a high-court majority were better if the election were held in a pandemic. They thought that fears about getting the virus would counter Democrats.. They wanted to drive down turnout.

SR: Then things got crazy. Late in the week before the April 7 election, the lawsuits began. What ended up happening is a federal district court agreed to extend the deadline for mail-in ballots to be returned, so they would be counted -- they could be postmarked up to a week after the election. That was a positive move. But that ruling was immediately appealed and challenged in separate litigation filed by the state legislature, the state Republican Party and Republican National Committee. Think about that, the RNC intervened in a primary where they didn't even have a contested candidate. It was all about setting the stage for the fall.

Let's pause and think about this from a voter perspective. It's a week or more before the 2020 primary. There's lots of political rhetoric and noise but the election is still on schedule. Voters had to apply for an absentee ballot if they didn't want to vote in person. That's akin to registering to vote for a second time in the same election. Then they have to get the ballot in the mail. Then they have to fill it out properly. Then they have to mail it back and have it return on time. As the week before the election unfolded, tens of thousands of applications and ballots were arriving and being mailed out every day, according to the Wisconsin Election Commission website.

So voters were scrambling. And so we election officials. Because of the virus, large numbers of poll workers said they couldn't staff the election. Most are 60 or older and they feared for their health. So, in disproportionate ways in different cities and towns, the local election officials began to close longtime precincts and create consolidated vote centers. This was all happening quickly. But election officials wanted to preserve an in-person voting option, because the state only had six percent of its voters cast absentee ballots in 2018. Lots of people, from people registering to vote on Election Day to people with disabilities, vote at polls.

Come Monday, the day before the election, the governor issued an order to postpone due to health reasons. The state's Republicans immediately sued and told election officials to keep preparing for an election. The state Supreme Court (its conservative majority) ruled later on Monday, that the governor did not have the authority to delay the election, citing the lame-duck session laws. Later that day, the U.S. Supreme Court's conservative majority ruled the same way. So, what's important there for 2020 is we have a judiciary that is elevating previously adopted state laws, however anti-democratic, above voting rights and public health.

STAY IN THE KNOW
If you've enjoyed this, sign up for our daily or weekly newsletter to get lots of great progressive content.
Series: "voter disenfranchisement"