Rhetorical war has far-reaching consequences, including a potential economic slump via the disruption of global oil supplies 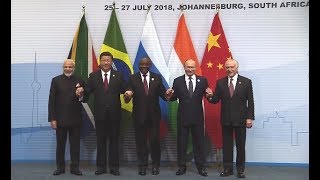 The Johannesburg Declaration is unmistakable: "We recognize that the multilateral trading system is facing unprecedented challenges. We underscore the importance of an open world economy."

And that also implies reaching to the next level; "It is important that we continue to pursue innovation-driven development and build the BRICS Partnership on New Industrial Revolution (PartNIR) to strengthen coordination on macroeconomic policies, find more complementarities in our development strategies, and reinforce the competitiveness of the BRICS countries, emerging market economies and developing countries."

If PartNIR sounds like the basis for an overall Global South platform, that's because it is.

Relations such as these certainly do not include a superpower unilaterally imposing an energy export blockade -- an act of economic war -- on an emerging market and key actor of the Global South.

Xi is keen to extol a "network of closer partnerships." That's where the concept of BRICS Plus fits in. China coined BRICS Plus last year at the Xiamen summit, it refers to closer integration between the five BRICS members and other emerging markets/developing nations

Argentina, Turkey and Jamaica are guests of honor in Johannesburg. Xi sees BRICS Plus interacting with the UN, the G20 "and other frameworks" to amplify the margin of maneuver not only of emerging markets but the whole Global South. ""So how does Iran fit into this framework?

An absurd game of chicken

Immediately after President Trump's Tweet of Mass Destruction the rhetorical war between Washington and Tehran has skyrocketed to extremely dangerous levels.

Related Topic(s): Brics; Economic Stimulus; Iran; Iran Russia And China; Iran War; Oil, Add Tags
Add to My Group(s)
Go To Commenting
The views expressed herein are the sole responsibility of the author and do not necessarily reflect those of this website or its editors.