This article first appeared at Intrepid Report on February 19, 2016 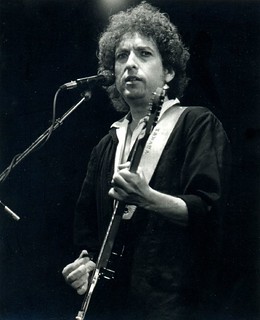 "The song 'Political World' could have been triggered by current events. There was a heated presidential race underway. But I had no interest in politics as an art form... The political world in the song is more of an underworld... With the song I thought I might have broken through to something. It was like you wake up from a deep and drugged slumber and somebody strikes a little silver gong and you come to your senses." Bob Dylan, Chronicles

We live in dark times when the prison gates of seeming hopelessness clang shut around us. Endless U.S.-led and -sponsored wars, a new Cold War, nuclear threats, economic exploitation, oligarchical rule, government spying, drone killings, loss of civil liberties, terrorism, ecological degradation, etc. - the list is long and depressing. Awareness of a deep state hidden behind the marionette theatre of conventional politics has grown, even as the puppet show of electoral distractions garners the headlines. Readers of the alternative media learn the truth of government conspiracies involving assassinations -- JFK, MLK, RFK, et al. -- and countless other evil deeds without cessation. Excellent writers uncover and analyze the machinations of those responsible. Anger and frustration mount as people listen to a litany of bad news and propaganda spewed out by the mainstream corporate media. It is easy to be overwhelmed and disheartened.

Despite the mute despair and apathy that fill the air, hope is needed to carry on and resist these destructive forces. Sometimes in such a dark time the eye begins to see and the ear hears hope in unexpected places. Doing so necessitates a bit of a sideways move to discover pockets of resistance hiding in the shadows. There are torches of illumination in the underworld, but we need to come to our senses to get there.

"Emotion is the chief source of all becoming-conscious. There can be no transforming of darkness into light and of apathy into movement without emotion." Carl Jung

If you've ever played music or basketball, fell dizzyingly in love, or lapsed into a spell writing words or being engrossed in a passionate pursuit, you'll easily grasp what follows. But maybe these specific experiences aren't necessary. You've lived, you're alive, and you can hear the pitter-patter beat of your dribbling heart. That's probably plenty. You know the game can be a roller-coaster ride with all its ups and downs, and when it ends you will have won or lost something, exactly what being of the essence.

Rhythm, melody, and movement: from these life is born and sustained. They are also integral to sports and art -- music, writing, painting, sculpture, dance, etc. -- even when they are apparently absent.

If, for example, one looks at Alberto Giacometti's sculpture, Tall Walking Figure, its immobility implies movement. Such paradoxical inclusiveness pertains to still-life painting as well. While seemingly immobile, and defined by some as dead life, such paintings are encompassed by the presence of the absence of movement and change, the essence of all living things. To grasp the paradoxical nature of art -- and life -- one must approach them as an artist and see the wholeness in broken pieces. "Everything is broken," Bob Dylan sings, "take a deep breath, feel like you're choking."

"Life is the best play of all." Sophie Michel, a 7-year-old musician

I think it is fair to say that living is the ultimate art and as the artists of our lives our medium is time and space. And that it is in sound that time and space are epitomized. Musical sounds carry us through time and space in a reverberating vital impulse. Music brings us to our senses. Being emotional, it sets us in motion. We are moved.

Related Topic(s): Basketball; Death; Dylan-Bobby; Hope Is The Thing With Feathers; Rebirth; Songs; Spiritual; Transition, Add Tags
Add to My Group(s)
Go To Commenting
The views expressed herein are the sole responsibility of the author and do not necessarily reflect those of this website or its editors.